If ever there was an aptly named golfer from Las Vegas, it was Monte Carlo Money. As a guy who qualified for three U.S. Opens, Money inevitably faced reporters in the Open press tent who thought his name had to be a ruse. 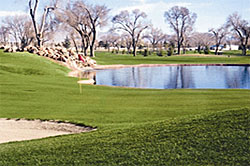 But Monte was the real deal. He once shot 58 at Las Vegas Golf Club, aided according to his playing partners, by downing a couple six-packs of Budweiser along the way. The beer was both a blessing and a curse for Money, as he seemed to play better with tall ones in his belly, but found that most competitive golf tournaments discouraged the chugging of a lager along the way.

Although he tried a few times to make his way to the PGA Tour, he always fell short. One story even had him being thrown in jail while on a trip when he was attempting to qualify for the US. Open. But with his name and talent, he will forever be considered a certified local legend.