April 16, 2009–Between them, Laurie Johnson and Sherry Corsello have now won the Womens Southern Nevada Golf Association Amateur Championship a combined total of nine times. Johnson has dominated the Championship Gross division since the turn of the century, having won this event in 2000, 2001, 2003, 2004, 2008, and again this year. Corsello, also the president of the WSNGA and Las Vegas' Executive Women's Golf Association, has won the Net Division title in 2001, 2003 and again in 2009. The event was played at Las Vegas golf course Palm Valley Golf Club (pictured), part of the Golf Summerlin group of Las Vegas golf courses.

The tournament is open to women at least 50 years of age as of May 23, with a verifiable handicap administered by the Southern Nevada Golf Association. There is no handicap index limit; however, the maximum handicap strokes will be 36.  Players will be flighted by age, but first place gross and net may come from any flight.  Prize fund will pay at least 1/3 of the field.  Entries must be received by May 1. For more information contact Margie at m.bowgren@netzero.net or visit the WSNGA Web site at www.wsnga.org. 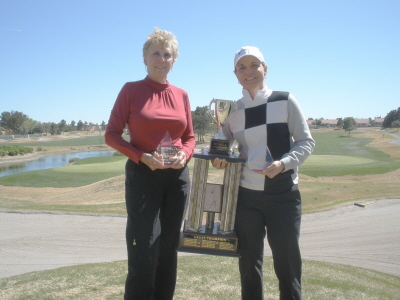