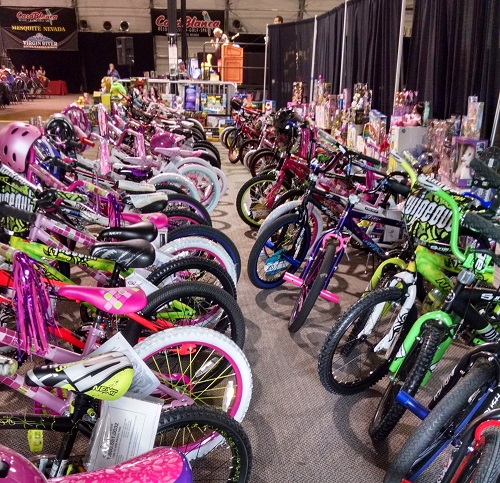 Las Vegas, Nevada (January 25, 2015)–It's never too late to spread the good cheer that happens around the holidays. And there was plently of good cheer created in December in Mesquite, Nevada, a golf destination located about 77 miles north of Las Vegas. Golf Mesquite Nevada, a marketing co-op of championship golf courses and luxurious resorts in the area, was a sponsor of the 10th annual Golf Fore Kids tournament , which benefits local youth at Christmas time each year. Golfers donated 116 bikes and 42 scooters, and the estimated value of toys and cash donations for 2014 exceeded $47,000. Over the 10 years, the tournament has raised approximately $385,000 of toys, bikes and cash which has been distributed to under privileged children in the Mesquite area. –-By Brian Hurlburt.

The first Golf Fore Kids tournament was held in 2005 at Falcon Ridge Golf Course.  What started as a simple idea with just a few volunteers has grown into a major charity event for the Mesquite, Nevada community each Christmas.  The 10th Annual Golf Fore Kids Tournament held on Dec 11th, 2014 was the biggest in the event's history.  Four golf courses (Falcon Ridge, Conestoga, the Canyons at Oasis Golf Club and Palms) were donated for the day which allowed 100% of the proceeds raised to benefit local area youth this Christmas. The Casablanca Resort event tent was donated for the luncheon, prizes, and raffle following play. A record number of golfers and sponsors stepped forward this year to help the cause. 558 golfers participated and made the event possible by generously bringing toys (minimum $50 value) in lieu of paying a green fee. In addition, 94 holes were generally sponsored by businesses.

“This is one of the very best events our partners get involved with,” said Golf Mesquite Nevada Executive Director Cody Law. “Donation of our courses to this event is a no-brainer. It’s very gratifying to see the golfing community come together each year to help this worthy cause.”

The toys are first used to fill the needs of the Mesquite Salvation Army Angel Tree program. The remaining toys are then distributed between the cities of Littlefield/Beaver Dam on the north side of Mesquite, all the way to Moapa/Logandale on the south end. These donations help to bring Christmas to over 200 children.

Golf Mesquite Nevada partners join with tournament administrators in thanking the golf courses and their staffs for donating their courses and service for the day. Mesquite Gaming (owners of the CasaBlanca and Virgin River Resorts) played a significant role in donating the event tent center and providing staff to set up and clean up the facility. Local police and fire departments provided substantial help in collecting, loading and unloading the toy donations. Countless volunteers, who give of their time and energy, make the Golf Fore Kids event a success.  Special thanks to the golfers who participate year after year and make the event possible. Christmas will be a little brighter this year at hundreds of homes surrounding Mesquite, Nevada!