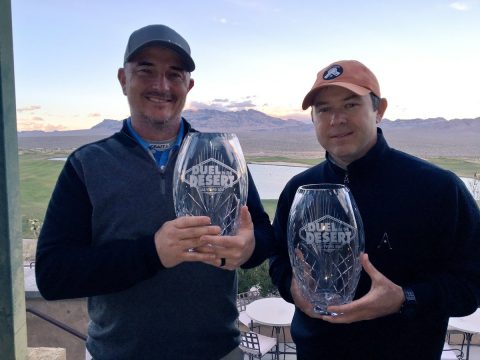 LAS VEGAS, Nev. (Feb. 4, 2017)–The team of Joseph Fox and Jeff Shell is making a habit of winning on the Golf Channel’s Golf Am Tour. The duo won for the sixth time in the Tour’s history (and third in Las Vegas) in winning the first flight in the Duel in the Desert 2017. The event was held the week of Feb. 1-3, 2017, at the three courses at the stunning Las Vegas Paiute Golf Resort. For Fox-Shell, it was definitely a team victory. –By Bill Bowman.

“We played good golf all three days,” said Fox, from Peoria, Ariz. “We ham-and-egged it and that’s always a key if you’re going to compete. And the putting…if you putt well, you’ve got a chance.”

The Las Vegas Paiute Golf Resort is comprised of three Pete Dye designs–Wolf, the Snow Mountain and the Sun Mountain. The event spanned all three courses and featured 216 teams. Teams faced a different format each of the three days. Day 1 was a Modified Alternate Shot while Day 2 was a Best Ball and Day 3 was a Scramble. In all, there were 14 flights.

The teammates have come to know and love the Las Vegas Paiute Golf Resort. “We really enjoy coming out here,” said Shell, who is from Austin, Tex. “The courses are always in excellent shape and the greens are usually perfect and fast. It’s an event we always look forward to playing.”

Fox added the three courses really make for a solid test of golf. “We generally play the Snow (Mountain) the best and the Sun (Mountain) is the easiest,” he said. “But then there’s the Wolf…it’s always a great test of golf.”

The second day saw scores improve. Gabe Rodgers-Geoff Rodgers fired a 5-under-par 67 to move into the overall lead with a 4-under-par total of 140. But the biggest move of the day was the team of Ron Finnerty-Mark Miller. After an opening round 78, the duo rebounded with a second-round 7-under-par 65 that was bogey-free to vault into fourth place. After two days, there were four teams under par.

But it was the team of Fox-Shell that showed consistency pays off, posting rounds of 74-68-67—215 in cruising to a five-stroke victory over the team of Chris Lanning-Lance Strawn.

“This tournament is always a great time,” Shell said. “It’s a buddy trip and a great time to hang out in Vegas for a few days.”