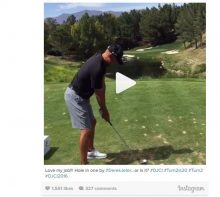 Las Vegas, Nev. (April 19, 2016)—Derek Jeter’s retirement may have him out of the baseball spotlight, but that doesn’t mean the 14-time all-star and some of his closest friends don’t shine brightly—especially in Las Vegas. Jeter and friends took part in the Derek Jeter Celebrity Invitational at Aria Resort & Casino and Shadow Creek. And one of the moments from the Derek Jeter Las Vegas golf tournament set the web on fire. –By Bill Bowman   Jeter’s sister posted to Instagram that Jeter made a hole-in-one on the luscious par 3, 17th hole at Shadow Creek. It took the
Read More

Las Vegas, Nev. (April 23, 2016)–Golf Digest Think Young Play Hard Invitational brings the world to Las Vegas for a few days of VIP golf and Vegas vibe on and off the course. The event kicked off this week with a pool side bash at ARIA before golf at Royal Links Golf Club and Bali Hai Golf Club. The pool side bash featured a DJ, the Miller Lite lounge, splash golf in the pool and more. Golf Digest cover girl Paige Spiranac made an appearance during the event as well. Spiranac is a social media phenomenon and sponsored by Callaway
Read More

Las Vegas, Nev. (March 28, 2016)–Tiger Woods annual trip to Las Vegas for Tiger Jam, a major fundraiser for his foundation, is set for April 29-30 with golf to be played at Shadow Creek and a major concert headlined by Jason Mraz. It is the 18th annual event, with nearly all of them taking place in Las Vegas. Woods is currently injured with no scheduled return to the PGA TOUR. It has been a common theme for Tiger Jam, where he once watched Van Halen perform while on crutches. There are still opportunities to purchase sponsor packages. –By Brian Hurlburt. Tiger Woods
Read More

Las Vegas, Nev. (Jan. 14, 2016)-In a press release about the 12th Annual Player’s Trust Major League Baseball golf event, officials described the 2016 event as the “most star-studded” in the organization’s history. There are probably several reasons why that is the case, but chief among them is holding the tournament in Las Vegas and at the Top 100 Cascata. Both are pretty good draws, and with the tournament hosted by Las Vegas locals and Major League Baseball superstars Bryce Harper and Kris Bryant, the golf and event/fundraiser was a home run. Pun intended. –By Brian Hurlburt. More than 50
Read More

Las Vegas, Nev. (Dec. 31, 2016)–Current UFC Welterweight Champ Ruthless Robbie Lawler took some time off from training to visit TaylorMade Golf Experience and get custom-fitted for new clubs. The champ, who goes by the nickname Ruthless, worked with TaylorMade fitting expert Dave Hall and was fitted for the new PSi irons and M1 driver and fairway woods. Lawler fights Carlos Condit this weekend at MGM Grand Garden Arena. –By Brian Hurlburt. According to BJPenn.com, Lawler is one of the most devastating finishers in the sport and one of the hottest fighters in the world. Below are a few facts
Read More

Las Vegas, Nevada (June 28, 2015)–The Squeeze is about a humble young man from a small rural town who gets caught in between two notorious gamblers in high stakes golf matches until the stakes become life and death. It stars Jeremy Sumpter, Jillian Murray, Christopher McDonald and Katherine LaNasa. Seven-time Emmy award winner and legendary sports producer Terry Jastrow wrote and directed this highly acclaiming film. And, oh yeah, it’s based on the life of Vegas golf pro Keith Flatt. It’s worth the watch, and you’ll never see the ending coming and it brings the whole movie to a terrific
Read More 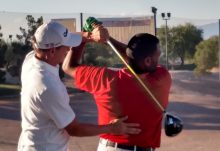 Las Vegas, Nevada (June 6, 2015)–You never know who you will run into in Las Vegas. If you were at the TaylorMade Golf Experience on Friday, you would have seen legendary swing guru Hank Haney working with actor/comedian Anthony Anderson in the new Flight Deck area of the facility that is located on the Las Vegas Strip. Haney is a TaylorMade Golf staff while Anderson is an avid golfers who plays in various charity events in Las Vegas including the Michael Jordan Celebrity Invitational. Anderson was in town this time hosting the Mario Batali Swing Session tournament held at Cascata,
Read More

Las Vegas, Nev. (Jan. 12, 2015)—There are rounds of golf in Las Vegas that are more special than others. Such was one of those rounds held recently at the PGA TOUR-owned TPC Las Vegas. This one hit close to home for many because it benefitted the National Center for Missing & Exploited Children and featured a star-studded celebrity lineup. The annual charity tournament was hosted by Canon and featured a star-studded field of golfers including the likes of Hall of Famers Rollie Fingers and Jonathan Ogden in addition to Roger Clemens, Alice Cooper and other big names. –by Bill Bowman
Read More

Las Vegas, Nevada (November 24, 2014–There are more than 60 golf courses in the Las Vegas Golf Region, and over the previous two days, President Barack Obama played a couple of them in near perfect weather in late November. Obama played Shadow Creek–once named the top golf course in the world by The Robb Report–and also Reflection Bay Golf Club, a Jack Nicklaus design that once was a Top 100 golf course in America until it was closed due to the economy but recently re-opened. Obama is just another in a long line of presidents who have played golf in
Read More

Las Vegas, Nevada (July 19, 2014)–NBA Coach Mike Woodson loves basketball, but golf may be his passion. Woodson, who recently joined the staff of the Los Angeles Clippers, is hosting The Coach Woodson Las Vegas Invitational, a luxury and lifestyle charity event to be played at Southern Highlands Golf Club with special events at Mandarin Oriental. Las Vegas luxury golf expert and former UNLV Women's Golfer Seema Sadekar is the hostess of the event. Also scheduled to appear is singing superstar Brian McNight and other celebrities and athletes. –By Brian Hurlburt.
Read More

Las Vegas, Nevada (May 24, 2014)–The 16th-annual Tiger Jam returned to Las Vegas last week welcoming celebrities, sponsors and rock stars for a memorable, star-studded weekend that raised nearly $1 million for the college-access programs of the Tiger Woods Foundation. After a golf clinic and outing at Cascata on Friday and a Friday night charity poker tournament, OneRepublic joined host Tiger Woods at the Mandalay Bay Events Center Saturday night where the GRAMMY-Nominated group rocked the arena performing some of their top hits. –By Brian Hurlburt.
Read More 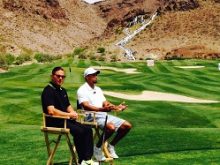 Las Vegas, Nevada (May 17, 2014)–For reportedly the first time, Tiger Woods and Sean Foley conducted a clinic together. The event, held at Cascata, was part of the weekend-long festivities of Tiger Jam, a major fundraiser for the Tiger Woods Foundation. For at least the third time at the annual Tiger Jam, an injured Tiger Woods was unable to hit full shots during the clinic. When Tiger was asked about his return to playing, he responded, "This year," with a laugh, then added, "It'll be this summer. I don't know when, yet. I'm just practicing and strengthenning, and trying to
Read More

Las Vegas, Nevada (April 26, 2014)–The 34th annual Super Bowl of Golf held by the NFL Alumni Association tees off today at Bali Hai Golf Club in the heart of the Las Vegas Strip. Bali Hai is a tropical golf experience and will be the site today where NFL legends such as pro football hall of famers Carl Eller, Raul Allegre, Ottis “O.J.” Anderson, and Ricky Ervins tee it up to raise dollars and awareness for charities that meet the goals of the organization which are "caring for kids" and caring for our own. –By Brian Hurlburt
Read More 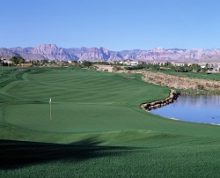 Las Vegas, Nevada (April 6, 2014)–Country Music Superstar Scotty McCreery may never figure out the game of golf, but he definitely knows why he annually returns to TPC Las Vegas for the Academy of Country Music (ACM) Lifting Lives Celebrity Golf classic. "This is such a great cause," McCreery told Billboard Magazine. "When you have a ton of folks that want to support a cause like this, and are so passionate about, that's how you know it's really making a difference in people's lives. I'm glad we can do whatever we can to help raise awareness and help out." Other country
Read More 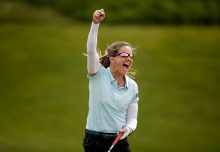 Las Vegas, Nevada (April 5, 2014)–Michael Jordan is back in town for the annual Michael Jordan Celebrity Invitational (MJCI) and along with him are an A-List group of celebrities, entertainers, musicians, and athletes. Check out some of the action through photos and more. Among the big names playing Shadow Creek and partying at ARIA Las Vegas this week are Aaron Rodgers, Julius Erving, Brandi Chastain, Jonathan Ogden, Winky Wright, Dwight Freeney, Brian Urlacher, and many more.  –-By Brian Hurlburt
Read More 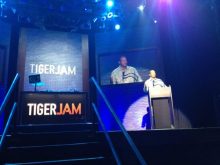 Las Vegas, Nevada (April 3, 2014)–Unfortunately, Tiger Woods is again coming to Las Vegas for the annual Tiger Jam event injured and not at the top of his golf game. Woods, who recently underwent back surgery, has announced that OneRepublic will headline the annual event which will take place May 16-17 at Mandalay Bay and include golf at Cascata, a poker event, a private gala and then the concert which is also open to the public. “We are excited to welcome OneRepublic to Tiger Jam for the first time in our 16 years,” Woods said in a statement. “This unique and
Read More