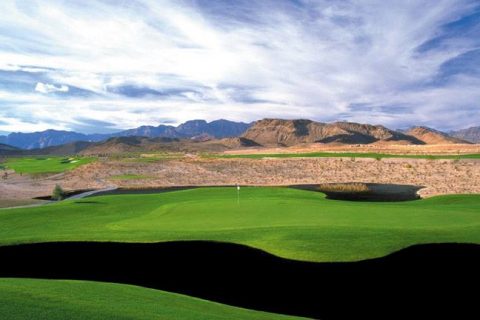 Not only have Jack Nicklaus and Arnold Palmer designed several Las Vegas golf courses, but they both won multiple PGA TOUR events played in the Las Vegas. Their impact on the city is deep. Palmer designed the two Las Vegas golf courses at Angel Park Golf Club, the private Red Rock Country Club and the public Arroyo Golf Club. Arroyo is part of the Red Rock Country Club community.

Nicklaus designed the private SouthShore Golf Club and Reflection Bay Golf Club at Lake Las Vegas. He also “designed” Bear’s Best Golf Club, which actually is a conglomeration of his favorite holes from courses that he has designed around the world. Replica holes are found from such courses as PGA West, Castle Pines and Cabo Del Sol, among others.

Nicklaus and Palmer each won the the Tournament of Champions and Nicklaus also won the Sahara Invitational. Both events were played in Las Vegas for several years.

“When we first arrived at the site in the late 1990’s, I was stunned by the panoramic views and the magnetism of the mountains,” remembered Pete Dye in a recent article in Las Vegas Golf and Leisure Magazine. “It was such an incredible property for an architect to be given carte blanche. They had about 4,000 acres and told me ‘have at it’.”

There are plenty of great Las Vegas golf courses to play. And many were designed by a who’s who. It’s time for you to play Vegas golf. Now.