Las Vegas, Nevada (Nov. 2, 2105)–UNLV golfer AJ McInerney, a senior and the captain of the UNLV Golf team, recorded rounds of 65-67–132 to win the Las Vegas City Amateur at Las Vegas Golf Club. His 8-under par total was two shots better than Sam Dickey and Kenny Ebalo. Brady Exber and Justin Kim finished tied for fourth place, four shots behind McInerney. It was the fourth Southern Nevada Golf Association (SNGA) major victory for McInerney, who grew up in Southern Nevada. –By Brian Hurlburt. “I felt good all weekend and I pretty much avoided mistakes both days, other than one
Read More

Las Vegas, Nev. (Oct. 21, 2015)–Convincing Golf Summerlin Director of Golf and PGA of America Professional Donny Long to talk about himself for more than a few seconds at a time is fairly difficult. Instead, Long, who grew up in Las Vegas playing golf and soccer with and against current PGA TOUR star Scott Piercy, switches the conversation to the three Las Vegas golf courses he oversees and his family. And that’s just the way he likes it. –By Brian Hurlburt Golf Summerlin is a trifecta of fun and affordable Las Vegas golf courses designed by the esteemed architect Greg
Read More 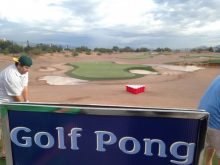 Las Vegas, Nevada (Oct. 18. 2015)–It was Golf Jam Weekend at the TaylorMade Golf Experience on the Las Vegas Strip. And the inaugural event went live with contests, TaylorMade Golf M1 driver and PSi irons, live music, blowout golf deals, demo days with major golf brands, food and drink specials and more. With each paid admission, guests received a free ticket to the Shriners Hospitals for Children Open, free range balls during Golf Jam, a $10 gift card to Las Vegas Golf and Tennis, and a free walking round of golf at TaylorMade Golf Experience on a return trip to
Read More

There are many worthy charities and organizations that assist returning soldiers with the transition from combat service into life back in the United States. Arguably one of the most important is also one that flies a bit under the radar. The Henderson Treatment Court was adopted by City of Henderson Judge Mark Stevens following an act of the Nevada Legislature, which established the court in 2009. Stevens is a veteran himself and wanted a way to reach out and giving a helping hand to his fellow military men and women who have gone a little wayward on their path back
Read More 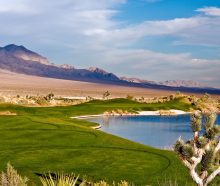 Las Vegas, Nevada (October 10, 2015)–Sun Mountain was near the top of the golf-course mountain for the recently completed third quarter national rankings on the popular GolfAdvisor.com. Sun Mountain finished as the second-ranked course in the list that takes into account user reviews and other data to come up with the Top 10. In Las Vegas, the three Pete Dye courses at the Las Vegas Paiute Golf Resort are each ranked in the top five for the area. –By Brian Hurlburt. It’s nothing new for courses at the Paiute to earn recognition. Golfers love the Paiute for many things including beauty,
Read More

Las Vegas, Nevada (Sept. 21, 2015)–Ayeesha McKeany has a view to “Dye-for” at her job as Director of Marketing for the Las Vegas Paiute Golf Resort, the home of three Pete Dye signature golf Las Vegas golf courses. McKeany, who was a member of the first recruiting class in the history of the UNLV Women’s Golf program in 2001 and was a four-year letter winner for the Rebels, made Las Vegas her home following her college career. She loves Las Vegas and the view at Paiute is just one of the benefits. –By Brian Hurlburt. McKeany, who played as Ayeesha
Read More

Las Vegas, Nevada (Sept. 17, 2015)– The UNLV men’s golf team, ranked No. 24 in Golfweek’s Preseason Poll, will open its 2015-16 season on Friday, Sept. 18,as it will compete at the OFCC/Fighting Illini Invitational. For more about Rebel golf visit UNLVMensGolf.com. — Portions from official UNLV athletics press release. The three-day tournament, which is in its 10th season and is being hosted by Illinois, will be played at the famed Olympia Fields Country Club (par 70, 7,142 yards), which has hosted two U.S. Opens and two PGA Championships among other high-level tournaments. This will mark UNLV’s first year playing
Read More

Nevada Open in Mesquite to Offer $125,000 Purse and Official Pro-Am

Las Vegas, Nevada (September 12, 2015)–The Nevada Open is the longest running professional golf tournament in Nevada, and has been played for more than four decades. Since 1998, the Nevada Open has been played in Mesquite, Nev., a golf and gaming destination located 77 miles north of Las Vegas, and this year the purse is the richest in the event’s history. The cash up for grabs Nov. 9-12 at CasaBlanca and Palms Golf Clubs for professionals is $125,000 and there will also be a pro-am with a side purse for pros and valuable prizes for amateurs. Click now for Nevada Open
Read More

Las Vegas, Nevada (September 7, 2015)–The Shriners Hospitals for Children Open, the Las Vegas PGA TOUR event, is offering some new VIP hospitality chances for this year’s tournament that runs October 22-25, 2015 at TPC Summerlin. The 16th Green Cabanas and Summerlin Box Seats on the 18th green feature VIP amenities paired with extraordinary views of the tournament. Check out complete details at ShrinersHospitalsOpen.com. –By Brian Hurlburt. What all of this means is that the golf party is about to be ON at TPC Summerlin as some of the best golfers in the world play. Whether you are on the
Read More

Las Vegas, Nevada (September 1, 2015)–The inaugural Las Vegas Golf Show hits Cashman Center this weekend, September 5-6, and will feature a variety of exhibitors from golf courses to junior golf associations to Las Vegas Golf and Tennis, Las Vegas’ local golf retailer. The catch of the show is that many Las Vegas golf courses are undergoing overseeding during this time and the show is a way for Vegas golfers to get their golf fix over the weekend. For more, visit GolfShowVegas.com. –By Brian Hurlburt. Special features of the show, according to organizers, will be celebrity appearances, stage presentations, golf demonstrations,
Read More

Las Vegas, Nevada (August 14, 2015)–The brand that two-time 2015 major champion Jordan Spieth is repping is coming to Las Vegas in style. Execs with both Under Armour and the PGA of America Fashion and Demo Experience both announced that the brand will be exhibiting at the show through 2018. The 2015 show kicks off August 17-19, and features a demo day at Cascata Golf Club plus a large indoor show at The Venetian. –By Brian Hurlburt “We are pleased to announce that Under Armour is continuing its longstanding tradition of PGA Show participation with a multi-year agreement,” said PGA
Read More

Las Vegas, Nevada (August 14, 2015)–The hype is over and the World Golf Skills Challenge is hitting Las Vegas this weekend. There are several events planned surrounding the inaugural event, and FlightScope technology and the world-renowned TaylorMade Golf Experience are a part of the golf education and event platform. FlightScope, a world leader in the development and manufacturing of sports technology, announced today that its Xi launch monitors will be used to track players’ data and performance as they are tested on a variety of skills during the World Golf Skills® Challenge on August 15 that takes place at the TaylorMade
Read More

Las Vegas, Nevada (August 9, 2015)–The prestigious Nevada State Match Play Championship was played at TPC Las Vegas last week, the final duo who competed for the title were a former UNLV Rebel golfer and a current UNLV Rebel golfer. Edward Fryatt, a 3-time UNLV All-American who went on to play the PGA TOUR prior to getting his amateur status back recently, went up against senior A.J. McInerny. A.J. won the title 3 and 1. –By Brian Hurlburt McInerney will be a senior at UNLV Golf this fall. He played in six tournaments as a junior during the 2014-15 season,
Read More

Las Vegas, Nevada (July 3o, 2015)–Once again much of the golf world will descend upon Las Vegas when the annual PGA Fashion and Demo Experience hits Las Vegas August 17-19, 2015, at Cascata and The Venetian. “The best names in golf fashion, equipment and technology providers are creating a PGA Fashion & Demo Experience in Las Vegas that is primed to excite retailers and help grow business,” said PGA Golf Exhibitions Senior Vice President and General Manager Ed Several. “Strong vendor support, complemented by valuable business programming and educational opportunities have attracted many of the most influential PGA Professionals and retailers
Read More

Las Vegas, Nevada (July 21, 2015)–Some of the top junior golfers from around the globe in several age divisions are in Las Vegas this week for the annual IJGA World Stars of Junior Golf tournament that is being played at TPC Las Vegas, Angel Park Golf Club, the Las Vegas Paiute Golf Resort and Badlands Golf Club. Players from such locales as Hawaii, United Kingdom, Trinidad and Tobago, Vietnam, Mexico, Canada, Singapore, Nevada and several other states and countries are in the field. –By Brian Hurlburt According to the official website and tournament director Marty La Roche, the “World Stars
Read More

Las Vegas, Nev. (July 19, 2015)–Chances are you’re watching players struggle with weather and course conditions on the Old Course at St. Andrews during the Open Championship this week. And, chances are you’re wondering how you might fare on a links-style course like the Old Course with all of its nuances. Well, you’re in luck. Tee it up at Las Vegas’ Royal Links Golf Club and you’ll experience 18 of the toughest–and most impressive–golf holes anywhere. And you can also visit the official Royal Links website to learn the tips on how to play the infamous Road Hole at St.
Read More

Las Vegas, Nevada (June 21, 2015)–Las Vegas is the Ultimate Golf City and five of the region’s courses are listed as the top courses in the state in the Golfweek Best of Nevada rankings. The list is topped by Shadow Creek and followed closely by Cascata and Wolf Creek. Wynn Las Vegas and the Wolf Course at the Las Vegas Paiute Golf Resort round out the top five. Cascata, Wolf Creek and Paiute are official course partners of GolfLasVegasNow.com and LasVegasGolfInsider.com and you make tee times at the courses from official links. –By Brian Hurlburt Since beginning its rating system
Read More

Las Vegas, Nevada (June 14)–From now until June 21, all golfers can help support the future of golf by playing great and exclusive Las Vegas Golf Region courses at terrific values when they participate in the annual Golf Course Superintendents Association of America “Rounds 4 Research” online Golf-rounds Auction. Vegas Golfers have the opportunity to bid online for the opportunity to play some of the best and most exclusive golf courses in the Las Vegas Golf Region and support the future of golf at the same time. Foursomes at such courses as TPC Summerlin, The Las Vegas Country Club, Spanish Trail Golf
Read More

Las Vegas, Nevada—Zane Thomas, a former Arbor View High School player and a member of the UNLV golf team for a brief time, shot a final round even par 72 at Spanish Trail Golf and Country Club to win the Southern Nevada Amateur. Thomas held off former PGA TOUR player and UNLV All-American Edward Fryatt to win the tournament. The tournament is a major championship on the Southern Nevada Golf Association Championship Series. Fryatt recorded a 3-under par 69 in the final round, including birdies on three of his first five holes, and both he and Thomas ended regulation tied
Read More