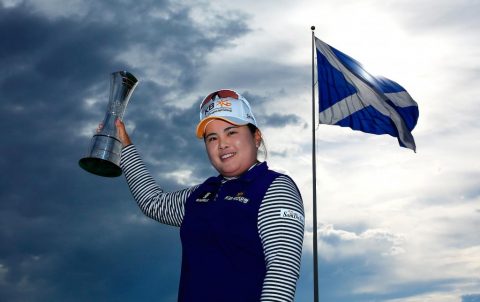 Las Vegas, Nevada (August 3, 2015)–We knew the legend of Vegas Golfer Inbee Park long ago, way before she took the golfing world by storm and won seven majors including what many are calling the career Grand Slam. We got a kick out of reading this article published in VegasGolfer Magazine in 2003. It gives a nice look into the building of the LPGA Tour’s best player, and the influence of Las Vegas in her development. So here you go, a look back as it ran in 2o03. And, oh yeah, congrats to Inbee Park on her spectacular play and career. Back then, she still included a hyphen in her first name. Photo courtesy ricohwomensbritishopen.com. –By Brian Hurlburt

You can almost picture In-Bee Park standing on the 18th green of some LPGA Tour tournament in the not too distant future, immediately after securing her first tour win. The tournament host gives her the oversized check; the television announcer talks to her about how she finally won; and then LPGA Tour commissioner Carolyn Bivens presents her with a crown and dubs her  the “Queen” of the tournament.

Well, maybe her being named the queen of the tournament is a stretch, but it might not be long before Park collects a check and a trophy, and ascends to top-tier status on the LPGA Tour. Just where a girl named In-Bee should be.

Those familiar with Las Vegas golf knew the name In-Bee Park long before the golf world was introduced to her earlier this year when she finished fourth at the US Women’s Open. She—along with her sister In-Ah—had made a name for themselves already, whether on the golf course winning national junior events or by the word-of-mouth that was leaking out from the Butch Harmon School of Golf where In-Bee and In-Ah were working with Shawn Callahan, the top pro on Harmon’s staff.

As a junior, Park won nine events on the prestigious American Junior Golf Association Tour, and won the 2002 US Girls Junior Championship and was named the AJGA Player of the Year that year. She also competed in the LPGA Tour’s Takefuji Classic, played in Las Vegas, three times as an amateur, finishing twice in the top 10.

Callahan started working with In-Bee about five years ago, and immediately saw the potential. He also saw a dedication and determination that drove In-Bee, and her family, to move from Florida to Las Vegas in pursuit of a better golf swing. Word was that the relocation happened because the Parks were looking for a change from the David Leadbetter Academy in Florida, and the best choice was the Butch Harmon School of Golf located at Rio Secco Golf Club in the Las Vegas suburb of Henderson.

“She came to us about five years ago as a 14-year old, and I have been working with her ever since,” says Callahan, who also helps LPGA Tour player Stephanie Louden and PGA Tour players Charley Hoffman and Craig Stadler. “Our overall goal is to always get better, and I think she understands how much she needs to improve now that she is on the LPGA Tour. In-Bee was always a top 10 player on the Futures Tour, but now she is playing against players that would all be top 10 players on the Futures Tour. She needs to get more consistent and also needs to work on becoming stronger.”

Park, who qualified for the LPGA Tour by finishing third on the Duramed Futures Tour 2006 money list, says that the competition she faces daily on the LPGA Tour is much deeper than her junior golf days, and adjusting to that has been a challenge. “There is a lot of competition out here, and if you shoot over par out here it isn’t good enough,” says Park. “And it’s very different than playing juniors. (Out there) you’re playing against friends. It’s really friendly and everything. Out here, it’s more competitive with a lot more going on.”

The In-Bee Park story begins in South Korea with a 10-year old girl dreaming of playing golf at the highest level in America, and with a family willing to do anything it could to make that fantasy a reality. The Parks moved to the United States for the sole purpose of furthering the golf careers of both In-Bee and In-Ah.

“That’s definitely the reason I came to the United States,” says Park. “There (are) not many golf courses in Korea, as in the United States. It was more expensive to play out there than here. I wanted to play in competition, more in the competition out here. I really wanted to get on the LPGA Tour.”

Through her first 22 events of 2007, Park had earned more than $330,000 and was 35th on the money list, assuring herself of a full exemption for the 2008 season. She was ranked sixth in putting, and was also fourth in rookie points. She had collected two top 10 finishes (the US Womens Open and a second-place at the Safeway Classic), and produced a scoring average of 73.24.

Park is now a fixture on the LPGA Tour, but has work to do before she can be considered one of the best in the game. This off season, Callahan and Park will work on a few things such making sure she gets through the ball and that her swing isn’t overly mechanical, but Callahan says Park can mature into a top player.

“In-Bee is growing up and is learning what she has to do to stay out here,” says Callahan. “She knows she needs to be more consistent, and to work on other areas of her game. But she is a very good putter and she chips the ball very well, and that is a big advantage for her.”

All hail the Golfing Queen of Las Vegas. Let the coronation continue.