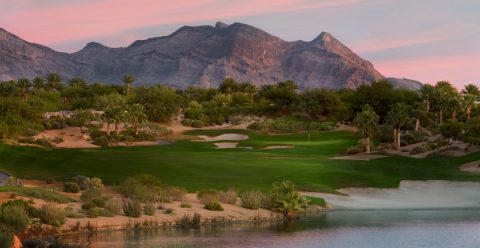 Siena Golf Club was designed by esteemed architects Lee Schmidt and Brian Curley and is the sister course to the Arroyo at Red Rock Country Club. The Arroyo was designed by Arnold Palmer. Both should be a part of an overall Las Vegas golf vacation itinerary, and the two-day packages allow you to play both courses within a 5-day period and save on your Las Vegas golf rates and green fees.

Las Vegas Golfer Adam Davis wrote the following about playing at Siena Golf Club, an opinion shared by other reviews and testimonials: “Great course and friendly staff. I play here almost weekly and would recommend it to anyone.”

Palmer not only is a playing legend who has won tournaments in Las Vegas, but he also has made an impact with his design work in the City that Glitters. The Arroyo, the public course located at the private Red Rock Country Club, is located in the shadows of the Red Rock Mountains and offers a sweet chance to play a signature Palmer design.

Both Siena and Arroyo also offer other special Las Vegas golf deals including “dynamic pricing” that allows golfers to save money during slower times and by booking farther in advance plus official Las Vegas stay and play vacations with Vegas resorts.

The Dynamic Pricing offers real-time tee times rates based on a variety of factors and golfers are the winners because you can pick and choose when you want to play and what rates are best.

March Madness officially kicks off in Las Vegas with several conference basketball tournaments including the Pac 12 and Mountain West plus other conferences. Then the sports books become the place to be once the NCAA tournament begins.