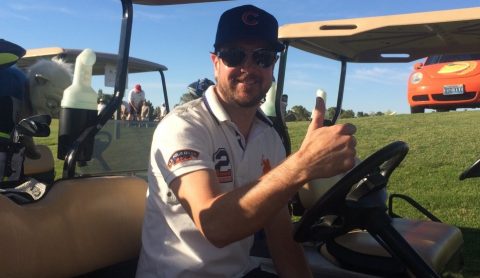 Las Vegas, Nevada (June 21, 2015)–Highland Falls Golf Club is one of three Las Vegas golf courses that makes up the Golf Summerlin trifecta. Annually the course plays host to the official golf tournament of the Southern Nevada Sports Hall of Fame. The Class of 2015 included NASCAR star Kurt Busch in addition to former Golf Summerlin executive Joe Kelly. Also in the class was former heavyweight champion Mike Tyson, former UNLV quarterback Glenn Carano and UNLV rodeo coach Rick Griffith. The golf tournament featured a full field of 160 players including Busch, who grew up in Las Vegas and is an avid golfer, and other 2015 inductees and previous inductees. –By Brian Hurlburt

Busch was once featured on the cover of VegasGolfer Magazine in a custom painted golf cart, and plays quite a bit of golf. He grew up in Las Vegas racing the little tracks of the old Bull Ring and also races in Pahrump. He also raced across the Southwest prior to earning a spot and becoming one of NASCAR’s top drivers. Busch doesn’t live in Vegas anymore but still considers it home and the city has a special place in his heart.

“Usually when you’re being mentioned for a Hall of Fame, it’s at the twilight of your career,” Busch told Las Vegas Review-Journal writer Steve Carp. “But it’s humbling to be receiving this honor, and I’m proud to be representing Las Vegas.”

The Southern Nevada Sports Hall of Fame is a non-profit organization committed to recognizing the outstanding achievements by Southern Nevada athletes, both in the world of sports and the local community. The induction ceremony was held at The Orleans Arena following the golf tournament.

“The class of 2015 represents a diverse group of individuals who have accomplished great things in our community,” said Hall of Fame Executive Director Dan Dolby. “Through their accomplishments in their sport of choice, they all have made major contributions and left an indelible mark on the Las Vegas area. We are thrilled to bestow upon them the state’s highest sports honor in welcoming them to the Southern Nevada Sports Hall of Fame.”

Busch is a second-generation driver (his father Tom was a national champion in lower levels of racing) and got his start tagging along with his Dad to race tracks dotted among the Mountain and Pacific time zones. At just 22, Busch entered the 2001 Sprint Cup season as a rookie competing with the best drivers in the world. In 2004, NASCAR introduced the Chase for the NASCAR Sprint Cup, where after the season’s first 26 races, the top-10 drivers in points competed in a 10-race dash to the championship. He would go on to claim the championship, edging Jimmie Johnson by eight points. So far in the 2015 season Busch has two victories and has clinched a spot in the Race for the Cup.

Highland Falls is a local and visitor favorite and is one of three courses at Golf Summerlin. The other two are the executive Eagle Crest and the full-length Palm Valley Golf Club. Golf Summerlin professional Shane Sanchez serves on the Southern Nevada Sports Hall of Fame committee.