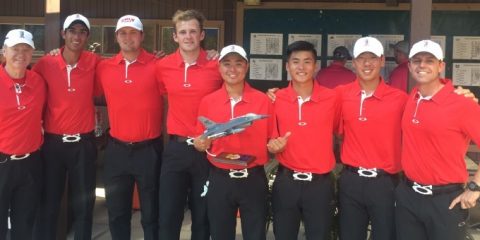 Las Vegas, Nev. (Sept. 12, 2016)—The big news keeps coming for the UNLV men’s golf program. Now added to the list of news is a Rebel sweep at the Gene Miranda Invitational, the home tournament of the Air Force Academy and the first tournament of the season for the Rebels. The UNLV men’s golf team shot a final-round-low 4-under-par 284 on Sunday to climb the standings and finished in a tie for first at the season-opening Gene Miranda Falcon Invitational, which was played at Eisenhower Golf Club’s Blue Course. And UNLV junior John Oda took medalist honors for his third career individual victory. – By Brian Hurlburt with UNLV Sports Information.

“I am really proud of the guys, and especially Johnny (Oda),” said head coach Dwaine Knight, who is in his 30th season leading the program and is a multiple hall of famer. “Shintaro Ban was outstanding as well this week. We have a couple of great leaders there. We really came back and finished strong in all three rounds after some slow starts. Finishing each round strong has been a hallmark of our program. This will give us some nice momentum going forward.”

The Rebels finished the 54-hole tournament at 1-under 863 along with UTEP, which shot a final-round 2-over. Colorado finished third at 1-over, Colorado State was fourth at 12-over and Wyoming rounded out the top five at 18-over. There were a total of 16 teams competing.

Oda finished at 10-under 206 for the tournament after carding a final-round 3-under 69 (seven birdies, four bogeys). UTEP’s Andreas Sorenson finished in second place, three shots back at 7-under, while UNLV junior Shintaro Ban was third at 6-under after a final-round 1-under.

“I got off to kind of a slow start, but I never really lost sight of my goals and just kept it going and grinded it out,” Oda said. “I made a few birdies and kept giving myself chances. I putted really well, which is something I have been working hard on. We finished well down the stretch, making some good pars. We have a lot more improvements to make as a team, but this was a great start to our season.”

“This was a good gauge to see where we are at as a team,” Oda also said. “The two freshmen, Justin and Yash, are really solid players. With hard work, they will definitely shine this season. There is a lot of good to come.”