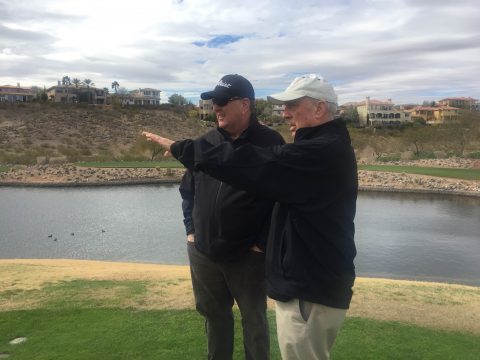 LAS VEGAS, Nev. (April 19, 2017)–Golf course architect Rees Jones has made an impact on golf courses around the world…including Las Vegas where his Rio Secco and Cascata designs garner national accolades every year. Well, be prepared for a redesigned Rio Secco as Jones will be giving the course a little facelift. So players now have about a month to take on the course before the changes get under way. — By Bill Bowman.

Rio Secco first opened its doors in 1997. Now, 20 years later, it’s time to spruce things up. And Jones is more than happy to lead the project. The course will close in late May and is scheduled to re-open in October.

In between, the plans call for Jones and his crew to work on re-design touchups that include bunkers and greens.

“This is an amazing natural site for golf,” Jones says. “We are going to resurface, re-grass and expand the greens back to their original sizes to recapture lost pin positions and also make changes to create a different character on some. Several bunkers will be eliminated or rebuilt to bring them up to today’s standards and to enhance the playing experiences for golfers of all skill levels.”

For Eric Dutt, Vice President of Golf Operations, working with Jones on the changes is impressive. “For Rees to return two decades later and share his expertise is very meaningful,” Dutt says. “Not a lot of courses are investing in projects like this during these challenging times for the golf industry.”

But there is good news for golfers still looking to tee it up while Rio Secco is being worked on–Cascata, another Jones masterpiece, awaits.

The par-72, 7,137-yard jewel is located high atop mountains just outside of Boulder City. The 18-hole layout will take players on a roller coaster ride over and around the mountainside where each hole provides its own brilliance.

So whether it’s Rio Secco or Cascata, Las Vegas players will find two courses that offer golfers everything they are looking for in a round: a stunning course that will impress and challenge from start to finish.