Yes, Tito Ortiz–the Huntington Beach Bad Boy, arguably the biggestif not baddest name in the Ultimate Fighting Championship (UFC), got whipped by Chuck Liddell to end 2006, but since we dont think Chucky Boy is a golfer, Tito still retains his unofficial status as worlds toughest golfer. 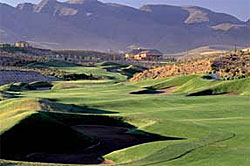 When we played golf with Ortiz last year at Rio Secco Golf Club in Las Vegas, he was in the middle of a dispute with the UFC management, but since then all things have been smoothed out at the UFC. The Liddell and Ortiz fight was the biggest event in the sports history. Dont look now, but boxing is about to take a back seat to UFC, if it hasnt already.

Ortiz started playing golf in his native Southern California, and has a home adjacent to Sea Cliffs Country Club in Huntington Beach. He usually tees it up when not training, and during the round at Rio Secco he sipped Corona Light and raspberry vodka. And he became a big fan of Las Vegas golf.

During the round he compared golf and fighting. Golf and fighting both take a lot of concentration, Tito told us. They are both like a chess match where every move puts you in position for the next. And everything can do downhill in a hurry if you make a mistake. Sports are 80% mental. Golf and fighting are no different.

And when we played, Ortiz wasnt involved yet with Jenna Jameson, and now that he is, we guess that his time on the course might be a little less. Ortiz is about a 20 handicap who shows glimmers of greatness with the short game, but struggles off the tee.

One interested observer of his fight with Liddell said that Ortiz looked nervous during the fight. Thats not surprising since he revealed on the course that he is scared before every fight. I dont really like conflict and I get nervous and throw up before every fight, Ortiz said before a miraculous chip shot. When Im fighting it feels like skydiving, with my stomach falling for an hour.

Rio Secco Golf Club is a dramatic Rees Jones design played in the canyons overlooking Las Vegas. The course is the home of the Butch Harmon School of Golf.