If you answered Arnold Palmer to the question in the headline, give yourself a pat on the back, and reward yourself by teeing it up at one of Las Vegas' most historic golf courses, Las Vegas National Golf Club. 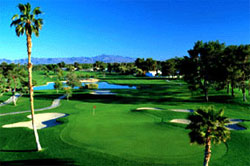 Palmer fired his course record of 63 at Las Vegas National Golf Club in 1967 during the PGA Tour's Tournament of Champions. Palmer finished as the runner-up in the event to Frank Beard. The course was known as the Stardust Country Club at that time.

The biggest names in golf have won events at Las Vegas National including Jack Nicklaus, Mickey Wright, Tiger Woods (the course was in the three-course rotation of the Las Vegas Invitational), Don January, Al Geiberger and many others.

The course is conveniently located just minutes from the Las Vegas Strip, and offers one of the most challenging sets of par three holes found in the valley.