IN 2010, Erica Blasberg committed suicide. She is deeply missed.

In the Golf Plus section of the March 26, 2007, Sports Illustrated Baseball Preview Issue, the SI staff evaluated several LPGA player websites. Las Vegas residents Natalie Gulbis and Erica Blasberg were at the top of the list. Gulbis plays out of Las Vegas golf course Reflection Bay Golf Club at Lake Las Vegas Resort while Blasberg plays out of the TPC Canyons.

The publication gave nataliegulbis.com the "Best Photos" award while Blasberg picked up "Most Techie" and "Most Derivative", writing ericablasberg.com has "lots of flash animation, music, pull down menus, oooh!" Check them both out for yourself. 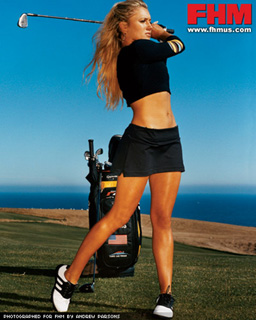 The SI writers liked the variety of Gulbis' photo options, writing that it included "Fiesta Bowl, Billboard Awards, Oscars, etc." There are also plenty of other photos of Gulbis on and off the course, and in various states of dress or undress plus countless magazine covers, including a couple from Las Vegas' own VegasGolfer Magazine.

The writers gave Blasberg's site the Most Derivative recognition because it is a "very close copy of Gulbis' site with more bells and whistles."

Both websites offer diaries from the two players, but they aren't updated very often. In this day and age of instant info, it would be nice if they spent a little more time checking in with the fans. And the flash animation on the Blasberg site slows down the experience a bit too much, but is very colorful and graphically appealing.

You can join "Club Natalie", but the fan club for Blasberg is "coming soon." Both sites are worth a look.