April 9, 2007–In the most defining article ever written about the evolution of Las Vegas golf, writer Roger Graves talked with seemingly every major architect who has etched his handiwork in the Southern Nevada desert including Jack Nicklaus, Arnold Palmer, Billy Casper, Pete Dye, Tom Fazio and others. The article appeared in VegasGolfer Magazine in 2005, but is timeless in how it chronicles the building of the world's most exciting golf destination. Graves also featured comments from Golf Digest Architecture Editor Ron Whitten, who wrote the following about Lee Schmidt and Brian Curley's creation at Bali Hai Golf Club: "If I hadn't seen the (Bali Hai) site before, I would not have believed it was possible. Where there was once nothing, there is now a beautiful, engaging 18 holes." 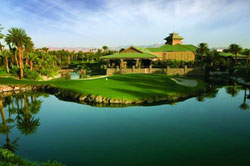 Whitten continued: "This was major transformation on the scale of Shadow Creek in North Las Vegas, perhaps more impressive, given the number of limitations of this property. Schmidt and Curley did a masterful jog of routing a full length 18-hole golf course into the slender tract of land, a textbook case that ranks with the masterful routing on narrow rectangles by Willie Park or Donald Ross."