May 9, 2007–You never know who you will run into when playing golf in Las Vegas, and this past weekend of big events was no different. The stars were burning brightly at Las Vegas hotels and casinos, and a few of the names in town spent some time on the greens and fairways of Las Vegas golf courses. The Tiger Woods of motorcycle racing, James "Bubba" Stewart, secured the "Superbowl of Supercross" championship at Sam Boyd Stadium on Saturday night, but while he was preparing for the race many of his friends and buddies were teeing it up at Las Vegas golf course Bali Hai Golf Club in the Road2Recovery golf event that benefits racers who are injured in action. BMX star TJ Lavin and former motocross superstar turned reality television star Carey Hart were among the notables that teed it up at the beautiful and tropical Bali Hai Golf Club. Hart also operates the successful Hart and Hunnington tatoo shop at the Palms Hotel. 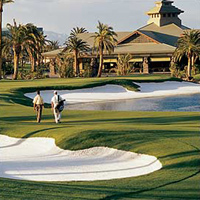 Bali Hai Golf Club is the home to hundreds of palm trees, a magnificent clubhouse, and several holes decorated with luxurious water features.

Former NFL number one draft pick Kijana Carter was spotted teeing it up at the Rees Jones-designed Cascata. Carter was drafted first by the Bengals in 1995, and then finished his career with the Redskins and Saints. Injuries curtailed his career. Cascata was once called "Golf's Hidden Treasure" by Sports Illustrated, and is now owned and operated by Harrahs. Cascata is also known as one of Las Vegas golf's finest client golf experiences.

Former NBA basketball player and current ABC and ESPN pro basketball analyst Greg Anthony teed it up at the Arthur Hills-designed Legacy Golf Club as well. Anthony led UNLV to the 1990 NCAA championship and then was drafted in the first round by the New York Knicks. He is a solid golfer who has hosted golf segments on ESPN2's Cold Pizza morning show.

The word was that Michael Jordan had some scheduled tee times at Shadow Creek but never made it out to the course. Jordan was in town for the fight a few days after teeing it up with Tiger Woods in the PGA Tour's Wachovia Classic pro-am.