May 29, 2007–Tiger Jam X played out over several venues in Las Vegas over the weekend, and several of music's biggest names rocked the private–and sometimes public–events. Hootie and the Blowfish kicked off the evening festivities at the Pre-Jam event that was held poolside at the Mandalay Bay. Guests were asked to wear all white, and according to one power couple that attended, the event was, "Awesome. The weather was perfect and Hootie was great, as usual. Kevin James did the introductions and mentioned some of the people who were in the crowd like Scott Hamilton, Jon Bon Jovi, Alonzo Mourning, Lindsay Davenport, Andrew Firestone, and, of course, Tiger and Elin Woods, and many others.

There was also some golf played at the exclusive Las Vegas golf course Cascata on Saturday, and Tiger gave a private clinic 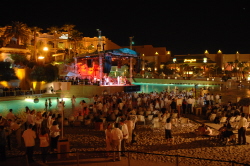 On Saturday night, the Tiger Jam returned to the Mandalay Bay for the private dinner and auction before the main event, a concert by Bon Jovi, while the opening act was Chris Daughtry of American Idol fame. 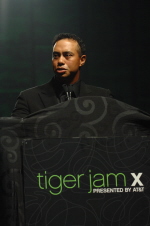 The theme for the Saturday evening event was all black, and several dignitaries spoke on behalf of the Tiger Woods Foundation including President Greg McLaughlin, and others. The ballroom was transformed into all black, lime green and white. At the event, Tiger spoke about how the idea of the new Tiger Woods Learning Center in California came about. After 9/11, Tiger said, he was inspired to do something more with his foundation so the idea of the Learning Center was born. An interesting part of the school is that kids set some of the curriculum with courses including rocket building. Tiger also mentioned it was "humbling" being taught by 14-year olds.

There was a silent auction before a high-end live auction that featured 11 items including a trip for two to the Bejing Olympics, pro-am spots at the Target World Challenge and Tiger's new tournament in Washington, D.C., a putting lesson with Tiger, and lunch with Bon Jovi in Manhattan.

Celebrities who attended this special event included the same ones mentioned above but also Chris Tucker, Gabrielle Union, Babyface, Holly Robinson Peete, and Will Ferrell, who emceed the Bon Jovi concert at the Mandalay Bay arena. He told the crowd that Bon Jovi had canceled, but a great cover band had agreed to perform in their place. 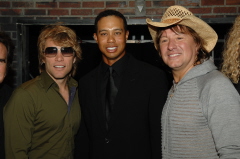 Other celebrities who were spotted at the concert included Hammer, and Las Vegas PGA Tour pros Charley Hoffman and Chris Riley, among others. All Tiger Jam guests sat in a special VIP section to the right of the stage, and after the concert went to a party in the House of Blues Foundation Room.