June 6, 2007–Golf legend Lee Trevino will be in the Fox television booth talking and covering the Ultimate Game at Wynn Las Vegas, and will watch with the other millions on television booth while one of 12 golfers–including three with strong Las Vegas ties–collects the biggest winner's check in all of golf. $2 million will go to the champion, and along with Trevino, longtime Las Vegas pro golfer Jim Colbert (he used to own and operate Sunrise Country Club and Las Vegas Golf Club) will be close to the action as he will serve as an on-course reporter during the event. I dont care if you have (Jack) Nicklaus or Tiger Woods out there, the pressure is going to be enormous with every putt  especially if theyre jammed up on the last nine holes, Trevino says.

Nothing would be better than to have about five guys within two shots of each other at the end, and I am going to tell you something, you are going to see putters jumping everywhere. It wouldnt surprise me if the guy that wins it faints right on the 18th green. We are going need an ambulance and a doctor up there, for him and me. 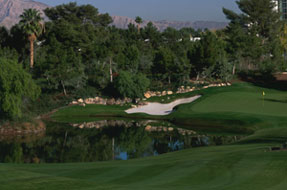 The event will be played Thursday, June 7, and Friday, June 8, on the 18 holes of the Tom Fazio Wynn Las Vegas golf course, but will be televised June 9-10 on Fox. The Wynn golf course covers the ground where the legendary Desert Inn Golf Club once stood, until Steve Wynn created a new masterpiece on the land. The only discernible relics that remain from the DI–a Las Vegas golf course that hosted presidents, celebrities, high-rollers and athletes on a regular basis–are some mature trees. The Wynn is a par 70 that is highlighted by dramatic water features, a waterfall behind the 18th green, and several other holes highlighted by typical and extraordinary Fazio flare.

What was once a filed of 40 players has been pared down to 12 by way of preliminary match play in The Ultimate Game at Wynn Las Vegas, a unique event where the have players put up $50,000 apiece and play for a $2 million winners share, golfs largest in history. That winners share is now within reach for an eclectic 12-player field, ranging from 54-year-old former Major League baseball pitcher Rick Rhoden to long-hitting 17-year-old Utah State Amateur champion Tony Finau, to conditionally exempt Nationwide Tour player Erik Compton, who broke the Wynn Las Vegas course record in a practice round Sunday with an 8-under-par 62, in addition to the Las Vegas talent.

Despite Finaus talent and prodigious length  he turned heads in the preliminaries when he routinely pounded drives 350-plus yards  Trevino said a control artist like Rhoden might dissect the par-70, 7,042-yard Wynn course shoehorned onto the Las Vegas Strip better than a more bomb-and-gouge player.

The guy that wins this golf tournament, in my opinion, is a guy that has complete control of the golf ball, Trevino says. I actually think that Rick Rhoden may have an outside advantage on everyone. He is very straight. He is not a short hitter. He hits the ball around 275-280 yards. That golf course is a par 70, and it is only 7,000 yards long. Those are the kinds of golf courses that were playing on the Champions Tour. So I kind of like him. I kind of like him on my side.

Finau, who hits the ball 340 yards, is going to have to be extremely careful with his tee ball there, especially on 36 holes. If you play 72 holes, you can get in a little bit of trouble and come back. But when you have 36 holes, you have got to play your percentages. Do not make anything over a bogey. You cannot make that up in 36 holes.

Finau, the reigning Utah State Amateur champion and Junior Ryder Cupper, announced he was turning professional in the week leading up to The Ultimate Game at Wynn Las Vegas, along with his 16-year-old brother Gipper, who, last year, became the youngest player in Nationwide Tour history to make a cut. Gipper Finau won his first-round match but lost in the second round and did not make the finals. After beating Rhoden, 3&1, to earn a spot in the final, Tony Finau hopped a plane back home to Salt Lake City to walk with his graduating class at 6:30 that same night.

Rhoden, who pitched in the Major Leagues from 1974-1989, earned the 12th and final spot to play for $2 million in a playoff May 30. Rhodens 4-under-par 68 in the 20-man, 18-hole playoff for two spots forced him into a sudden-death playoff with one other player, whom Rhoden beat on the second extra hole.

Compton also played his way through the 18-hole playoff. His 5-under-par 67 was the afternoon low and guaranteed him the first of two wild card spots into the final. Continuing that momentum, Compton made six birdies and an eagle to shoot a bogey-free 62 at Wynn Las Vegas in a practice round Sunday to set the course record, which was formerly 63, held by Jarner.

A medical success story, Compton picked up the game as a rehab technique following a heart transplant in 1992.

I hope he has got somebodys heart that was not choking because that is going to be a lot of pressure on a heart, Trevino says.