September 26, 2007–In 2005, Las Vegas golfer Kevin Marsh was one of 4,130 entries for the US Mid Amateur Championship, a United States Golf Association championship for golfers 25 years or older. He survived sectional qualifying, and then outlasted 264 golfers at the finals that were played at the Honors Course in Tennessee to win the championship over Carlton Forrester, who he throttled 10 and 9. Marsh travels to Oregon this week seeking his second championship and a trip back to the Masters that most likely goes to the champion. "My goals going into the Mid-Am this year are like any other year really," Marsh says. "I want to put together two solid rounds in stroke play and be prepared mentally for potentially tough weather conditions up there."

The event kicks off Saturday, September 29, with two rounds of stroke play, before the match play portion begins for the top 64 scores from stroke play. The event will colminate with the championship match on Thursday, October 4. The Bandon Dunes and Bandon Trails golf courses will be used for the event.

Marsh says capturing a high seed with the solid stroke play is key to his chances.

"Hopefully (I can) accomplish that and secure a high seed, and then just believe in myself like I did in '05 that I'm good enough to win each match each day and just stay patient," says Marsh, who is a real estate developer in Las Vegas.

Marsh also says patience, confidence and mental toughness are also keys to vicory in a major event such as this. 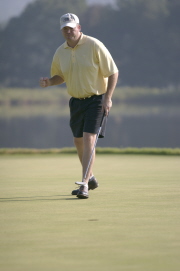 "You can't win a tournament like this in one or two rounds like sometimes you can in a stroke play event," says Marsh, who is one of the few guys around town that can wear his Masters hat out in public knowing that he's played in the tournament. "You have to realize–and be prepared for–that anything can happen in match play. I need to be prepared to grind out a tough day for a win as well as be playing my best to grind out a win. I was lucky in '05 in the 3rd round when I played Austin Eaton, the defending champion, and we both struggled with our games, but I hung in there and finished well on 14 thru 17 to win the match.  Each match presents a whole new challenge, which is what makes it so fun and exciting. If I play well, I feel like I have as good a chance as anyone in that field to win. But, a lot of things need to go right for that to happen for anyone who wins.  I've been playing pretty solid, it only matters though in big events like this when it really means something."

The 2007 Champion will receive the following: