November 23, 2007(This article previously ran in In Business Las Vegas)–When you’re in the golf business, generally, there is a lack of respect given to you by people in other professions. It’s a given that all people do in the golf business do is play golf, and every day is spent enjoying 18 holes of paradise, and a 19th hole of pure heaven. To be sure, being in the golf business has its advantages, but like any profession, those that practice their craft at the highest levels put in as much time and effort as anyone else. A perfect example of that is Walters Golf Director of Instruction Mike Davis who recently was named to GOLF Magazine’s list of top 100 teaching pros in the United States, and just this month graduated from the PGA of America’s Master Professional Program, becoming one of only 330 pros in the long history of the organization to do so. And he is one of the first—if not the first—to achieve the status after various new and extensive requirements were put in effect. Walters Golf owns and operates three Las Vegas golf courses, Bali Hai Golf Club, Royal Links Golf Club and Desert Pines Golf Club.

“The education and training that I received over the past two years in the Certified PGA Professional Program and the Master PGA Professional Program helped make me take a broader look and perspective at projects and challenges I encounter as a PGA professional,” says Davis, who has garnered 14 different PGA of America regional and section Teacher of the Year awards during his long career. “I have improved my skill as an instructor and knowledge of the latest in technology and philosophies. Attaining Master Professional status will allow me to positively influence golf in Las Vegas through my students, other PGA golf professionals and the golfing community in general.” 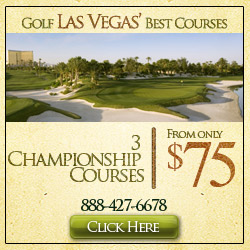 Davis, who’s first golf coach was Daryl “Mouse” Davis, creator of the run and shoot offense in football, was an all-around athlete growing up in Oregon. He was on the golf, track and baseball teams at Grant High School, and played hoops until his senior year. He also played Connie Mack baseball on a very competitive team until he had to make a difficult decision one summer. He either could play in an important baseball tournament or compete in a United State Golf Association Junior Amateur. He chose golf, playing fairly well in the tournament, but watched as his baseball team went on to win the national championship.

Golf continued to be his focus after high school, and he went on to a solid career at the University of Oregon and then played in PGA Tour events in the 1970’s. He also won the 1970 Oregon Amateur and the 1969 and 1970 Pacific Coast Amateur in addition to eight Pacific Northwest PGA events. He has also played in four US Open tournaments and also qualified for the 1979 PGA Championship.

Davis got started on the business side of golf when he went to work as assistant pro at the exclusive Waverly Country Club, and he later moved on to become the head pro at Olympic Country Club in addition to serving a few other head pro jobs along the way. But by 1990 he decided that it was time for him to completely focus on teaching golf, and he created the aptly-named Mike Davis Golf School that was mostly anchored at Tualatin Island Greens, a large practice facility in Tualatin, Oregon. He then had a brief stint at Langdon Farms Golf Club, a course that was managed by OB Sports, a regional golf management company that also operated Angel Park Golf Club.

Davis relocated to Angel Park in 1999, and has become ingrained in the Las Vegas golf community. He is the 2007 president of the Las Vegas Chapter, Southwest Section, PGA of America, is a board member of The First Tee of Southern Nevada, and he is the Director of Player Development for the UNLV Professional Golf Management Program.

“I didn’t know if I would be a good instructor until I got into teaching full time,” says Davis. “But it was the best decision I ever made.”

Becoming a Master Teaching Professional is the highest level a pro can achieve, and only comes after a pro has completed several courses of study, demonstrated a high-level of teaching and basically showed an overall dedication to the game and the pursuit of excellence, both personally and for his/her operation.

Davis says he spent hundreds of hours—if not thousands—completing the seven-course certification, the written report (his ended up being 77 pages long), preparing for the oral report, and live golf lesson review. The process honed his skills at every level, and he relied on many of the business skills that golf teaches to successfully complete the process.

“The thing that I’ve gotten out of golf as it relates to business is the discipline you need to be successful both in golf and in business,” says Davis. “You have to have a game plan, and you need to plan ahead and try to anticipate what will happen.

“This was a fun and rewarding process to go through, and I will encourage other pros to go through it. Hopefully it can upgrade the whole profession and make everybody a little bit better.

Golf world challenge: Davis says the goal of the Las Vegas Chapter, PGA of America, is to help make golf that much better in the Las Vegas community. “I felt that golf in Las Vegas could be improved in some ways, and we are in a unique position to give back to the game at all levels,” says Davis, who says the chapter is dedicated to upping the ante of junior golf in Southern Nevada, and working with organizations that have the same mission. Las Vegas Chapter information: southwest.pga.com. Walters Golf Academy info: waltersgolf.com.