January 5, 2008–Although this Las Vegas golf course is no longer around–the fabulous Wynn Golf and Country Club now stands where it used to be–there is no denying the history that unfolded at Las Vegas golf's venerable Desert Inn Country Club. Many people might not know that the Mercedes Benz Championship, these days the PGA Tour's kick-off event and formerly called the Tournament of Champions, dates back to 1953 when the very first event was played in Las Vegas at the Desert Inn. A chap named Al Besselink earned $10,000 for winning that event, but he is also said to have bet $500 on himself to win at 25-1 odds. That lucky ticket earned him $12,500, more than the first prize that was delivered to him in a wheelbarrel of silver dollars.

Besselink beat Chandler Harper by a single shot to win the event. And he followed up with a runner-up finish in 1954. No word on how he did in the calcutta pool that year.

Besselink was called Bessie by his fellow pros, and lived a true Las Vegas lifestyle playing the game with "a gambler's recklessness and a showman's flare" as Curt Sampson, a GOLF Magazine writer, described him in an article.

The legend had Besselink losing his $10,000 first prize in the casino following his round, but he has since refuted that. And in the story, Sampson writes that Besselink donated half of his winnings to cancer research.

Besselink also told Sampson that gambling–mostly in Las Vegas and New York in money games–was the only way to make good money playing the game during that period.

"We won all our money gambling," said Besselink. "You didn't make s— with the golf. I was spending $100,000 a year, living like King Farouk. And what did I make in prize money — five, ten thousand a year?"

The Desert Inn was the most historic and notable Las Vegas golf course, and was the scene of many major college and professional tournaments including the TOC, Las Vegas Invitational, Las Vegas Senior Classic, LPGA Championsip and others. Also, the course was played regularly by presidents, heads of state, celebrities and athletes.

Local casino magnate Steve Wynn bought the Desert Inn Hotel and property a few years ago, and built the WYNN Resort and then worked with Tom Fazio to completely re-create the Desert Inn golf experience. The only familiarity that remains today from the old course are some of the mature trees that still line the Wynn fairways. 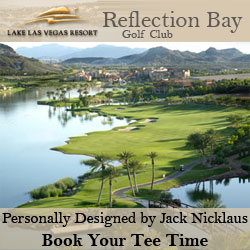 The TOC was played at the Desert Inn until 1967, when Howard Hughes purchased the Desert Inn hotel, and reportedly didn't want all of the fans and golfers running around during the tournament for fear of the microbes that they could produce. Hughes lived in seclusion on the top floor of the hotel and ordered his people to get rid of the tournament. Richard Maheu, Hughes' right-hand man, tried to convince him to keep the event but couldn't. The tourmament moved to La Costa in Calfornia in 1968.

"He thought the people who came to the tournament would bring germs that could reach his penthouse suite," Maheu told GOLF Magazine writer Richard Hack in an article. "I broke my back to convince him otherwise, but he just said, 'You have your instructions. It's your problem, not mine.'"

According to Hack and Maheu, Arnold Palmer and Jack Nicklaus didn't play in 1968 and Hughes took that as a personal affront, even though he wasn't involved in the event at any level. Hughes then tried to lure Palmer and Nicklaus with cash and movie roles, but to no avail. He then tried to ruin them, also to no avail.

The history of golf and Las Vegas goes way back.