April 21, 2008–Tiger Jam XI is in the books, and more than $1.5 million is reported to be going to the Tiger Woods Foundation. Celebrities attending the event that included golf at Las Vegas resort course Cascata were Dwayne Wade, Alonzo Mourning, Dr. J, Kristi Yamaguchi and Dancing With the Stars partner Mark Ballas, Jason Sehorn, Scott Hamilton and others, in addition to members of Van Halen who were the stars of this Tiger Jam in more ways than one. Not only did they rock the Mandalay Events Center but they donated $200,000–$100,000 of it from singer David Lee Roth while Fender donated an Eddie Van Halen (pictured with Roth and brother Alex) autographed custom guitar–of their own money to the cause. Cascata is a Harrah's Golf resort course that anyone can play and is the sister course to Rio Secco Golf Club, home of the world-famous Butch Harmon School of Golf, where Tiger Woods trained for many years.

Both Rio Secco Golf Club and Cascata are designed by Rees Jones, the legendary architect often referred to as the US Open Doctor.

Prior to the concert, VIP guests attended the Tiger Jam XI reception, which featured an exciting live and silent auction. Popular items included a Super Bowl package to the 43rd annual big game that raised $85,000 and a private, luxury Royal Canadian Pacific cruise that garnered $100,000. Other hot items included a trip to the 2009 Masters that sold for nearly $100,000 and a 2008 Buick Enclave, autographed by Tiger Woods. VAN HALEN lead vocalist, David Lee Roth, made a personal donation to Woods’ Foundation of $100,000, while the three Van Halens, Eddie, bassist Wolfgang and drummer Alex, donated the other $100,000 in addition to the guitar donated by Fender.

The Las Vegas-based concert series was created in 1998 by the Tiger Woods Foundation, an organization dedicated to inspiring dreams in America’s youth. Since its inception, Tiger Jams I – X have raised more than $11 million. Proceeds from previous Tiger Jams have supported Child Haven, Center for Independent Living, Greater Las Vegas Inner City Games, Boys & Girls Club of Las Vegas, UNLV Women’s Athletics, GRAMMY in the Schools and The VH1 Save the Music Foundation.

VAN HALEN is one of the most important and influential bands of all time. From the moment they released their self-titled 1978 debut album, VAN HALEN shook the foundations of rock, thanks largely to David Lee Roth’s peerless showmanship, Eddie Van Halen’s revolutionary guitar virtuosity and their songwriting abilities. The band’s record of achievement is hard to top. Presented with two Diamond Award RIAA Certified Status’ for their albums “Van Halen” and “1984”, VAN HALEN joins an elite short list of two time Diamond Award honorees in the history of the music industry.   The Diamond Award is presented to an artist for album sales of 10 million or more units.

They are also in the Guinness Book of World Records for having the most #1 hits on Billboard’s Mainstream Rock chart than any other band in history. Inducted into the Rock ‘N’ Roll Hall of Fame in March of 2007, VAN HALEN has produced a treasured body of work that fans will admire for decades to come. More information on VAN HALEN can be found at: www.van-halen.com.

About Tiger Jam and the Tiger Woods Foundation

Since its creation in 1998, Tiger Jam has raised more than $12 million for the Tiger Woods Foundation and select Las Vegas based charities through its sold-out performances and one-of-a-kind auction items. Tiger Jam was created by the Tiger Woods Foundation, an organization dedicated to empowering young people to reach their maximum potential. Proceeds from previous Tiger Jams have supported Child Haven, Center for Independent Living, Greater Las Vegas Inner City Games, Boys & Girls Club of Las Vegas, GRAMMY in the Schools and The VH1 Save the Music Foundation. 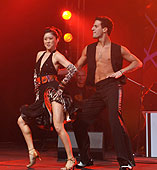 Specific programs of the Foundation include the Tiger Woods Learning Center, a youth-education facility and curriculum based in Anaheim, California that will soon expand to Washington, D.C., and a nationwide character development program based on Earl D. Woods’ book entitled Start Something. The Tiger Woods Foundation recently launched the Fist Pump Challenge, an online program allowing young people to post videos celebrating a personal goal or achievement. More information on the Tiger Woods Foundation and its programs can be found at http://www.tigerwoodsfoundation.org/.

AT&T Inc. is a premier communications holding company in the United States and around the world, with operating subsidiaries providing services under the AT&T brand. AT&T is the recognized world leader in providing IP-based communications services to businesses and the U.S. leader in providing wireless, high speed Internet access, local and long distance voice, and directory publishing and advertising through its Yellow Pages and YELLOWPAGES.COM organizations.

As part of its three-screen integration strategy, AT&T is expanding video entertainment offerings to include such next-generation television services as AT&T U-verseSM TV.