May 14, 2008–The Las Vegas Paiute Golf Resort is an open-to-the-public facility that is the home of the only three Pete Dye-designed Las Vegas golf courses in this area. And this week, the Las Vegas Paiute Golf Resort is the site of the 2nd FullTilt,net World Series of Golf event that pits golfers against each other in a format inspired by both poker and golf. And Ray Romano and Alan Thicke are just two of the notables teeing it up in the event that will be televised by CBS on June 28-29. Romano is a huge golfer who performs regularly at The Mirage, while Thicke is also a long-time golfer. Romano is off to a good start, reportedly having made it into the final 20 players. The champion will earn a $250,000 first prize. You, too, can play Las Vegas Paiute Golf Resort. Click now for easy, online Las Vegas golf tee times.

The World Series of Golf is a sports and entertainment company founded in 2004 whose activities include land-based golf events, media and an online, skill-based method of play for the game of golf. The company’s first land-based amateur golf tournament took place in Las Vegas in 2007 and is the basis and launch pad for subsequent events internationally and for the company’s overall strategy to leverage its patent-pending method of play, which combines the skill of golf and the wagering format of Texas Hold ‘Em poker, into a leading global event and online enterprise. The company plans to achieve its objectives through strategic partnerships, sponsorships and the founders’ extensive experience and contacts in the sports world and broadcasting.

The 2007 inaugural event was hosted by the Mirage Hotel & Casino and aired on national television in June 2007 and earned a viewership of more than 2 million domestic viewers. The event included 60 amateur golfers with Mark Ewing, a 31-year-old day-trader from Newport Beach, CA, taking home the top prize of $250,000. 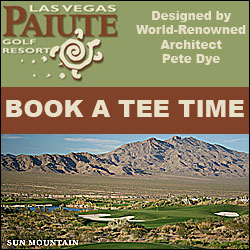 The Las Vegas Paiute Golf Resort is the home of Snow Mountain, Sun Mountain and the WOLF, all Pete Dye-signature Las Vegas golf courses. Dye was recently picked to go into the 2008 class of the World Golf Hall of Fame.