May 28, 2008–Las Vegas golf courses are continually the sites for major Las Vegas charity golf tournaments, and there's no telling how much money has been raised by these many Las Vegas golf events. From Tiger Jam to Danny Gans' Partee Fore Kids to the PGA Tour's Justin Timberlake Shriners Hopsitals for Children Open and many, many more, Las Vegas golf courses are the place to be to raise big money for char-i-tee. And UNLV head basketball coach and former Atlanta Hawks head coach Lon Kruger has been busy this off season raising dollars for various causes including the Nevada Cancer Institute and the American Cancer Society, and for UNLV's upcoming exhibition trip to Australia. In total, Kruger helped net $152,000 for the cancer cause, and $72,000 for his program in two separate events played at Las Vegas golf courses Southern Highlands Golf Club (pictured), TPC Summerlin and Spanish Trail Golf and Country Club. 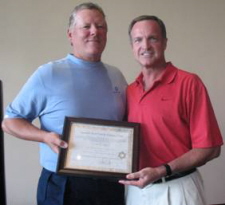 At the Spanish Trail awards ceremony, Coach Kruger was presented with an honorary membership to Spanish Trail Golf and Country Club by Mike Ford, President of Spanish Trail’s Board of Directors.

"The people at Spanish Trail Golf and Country Club were absolutely terrific," says Kruger, a single-digit handicap. "They stepped forward financially in a big way in support of this learning opportunity and cultural experience for our basketball team. Our players and program will benefit greatly."

On the upcoming trip, the Rebels will play primarily against Aussie club teams from June 23 to July 5. Plus, they will have the opportunity to practice for 10 days before the trip.

Those coaches mixed and mingled following golf at the notorious Hardwood Suite at the Palms Resort and Casino where UNLV coaching icons Jerry Tarkanian and Charlie Spoonhour joined in the celebration. The UNLV cheer squad entertained the crowd while guests bid on authentic silent auction items and showcased their talent in a quick pick-up game on the suite’s infamous basketball court.