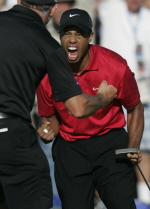 June 16, 2008 (UPDATED 3:17 PM PST) –It's seems cliche to write, but Tiger Woods stalks a golf course like a Tiger does its prey. His focus is singular on getting results, and even though thousands call out to him throughout a round, there is hardly ever a time when he engages the gallery or responds to the shouts of encouragement. And that's OK, because without that laser focus, Tiger wouldn't have given the golf world the countless dramatics that he has over the years. And on Sunday at the U.S. Open at Torrey Pines, Tiger added a final-hole birdie to force a Monday playoff with Rocco Mediate to the list of unthinkable shots and moments that he has created. And Tiger's focus didn't waver as he walked through the sea of golf fans to the scorer's tent. He slapped a few high fives along the way, a big one with agent Mark Steinberg, but his eyes never met any other's, and he only let a very small smile/smirk, cross his face. But then, as he was waiting to be interviewed by NBC, a lady in the crowd yelled, "Happy Father's Day, Tiger!" And that got him. He looked up with a huge smile and said, "Thank you …" in sincere appreciation. Photos courtesy USGA.org.

Tiger played this U.S. Open, again, without his late father Earl, who guided Tiger to where he is today. The stories are legendary about how father Earl prepared his son for moments like this.

But these days, Father's Day takes on even more meaning for Tiger as he is now a Dad. And when asked how he would want his very young daughter, Sam, to remember this day when she does get old enough to understand what's going on, Tiger gave a response that surely would've made Earl proud. 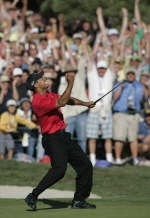 "That I got the W," said Tiger, emphasizing that the only thing that matters is getting the job done.

After completing the 19th hole playoff with the 'W', Tiger added the following thoughts about playing on Father's Day.

"There's no doubt (it matters she is here)," said Woods. "This is — I remember here at Torrey Pines during the Buick was the first time she ever crawled. And now she's running around here. So it means everything. It really does. To have — I lost my dad a couple years ago, and I know how special it was for him in 2002 for me to bring this home and talk to him about it and share it with him. I can't do that any more, but now I'm a father, I'm on the other side now. So this couldn't have been — it's probably the greatest tournament I've ever had."

Las Vegas physical therapist Keith Kleven reportedly continues to be with Tiger in San Diego, helping to work with Tiger and his recovering left knee that continues to cause Tiger difficulty.

"Well, it is what it is," Woods said about the knee.

"Did it get better, no. I took some things to relieve that, so I feel a bit better now."

Woods also said that doctors have told him to not play golf, and alluded to what the treatment would be on Sunday evening.

"A lot of icing," said Woods, who walked to the Lodge at Torrey Pines that is adjacent to the golf course with Steinberg following his interview session. "Trying {to} get the swelling out. And just try and make sure I have a range of motion."

Tiger was also pressed as to what the severity of the knee situation was, and if playing could affect his long term future but Tiger didn't give any hints, only saying that he knew what doctors had told him, but he wasn't saying.

More notes from the U.S. Open Final Round

One of the first people to hug Tiger following his 18th hole miracle was NIKE Founder Phil Knight, who had been in town on Saturday and Sunday following Tiger.

Campbell was playing in his seventh U.S. Open. The tie for 18th is his best career finish in the U.S. Open.

Scott was playing in his seventh U.S. Open, and now has made the cut three times. His best finish was a tie for 21st in 2006.

Fellow PGA Tour player and U.S. Open Champion Lee Janzen stuck around to support Mediate and watched with Rocco as Tiger made the putt to force the playoff.

"I have nothing left right now. I'm toast. It was the most amazing day of golf I've ever experienced. Tomorrow is going to be pretty amazing, too, but today was absolutely remarkable. I've never been there like that before. And I just found out what it's all about. It doesn't matter how you get it in, you've just got to get in and trust what you've worked on all your life. The putting. There's no technical anything going on, it's all make the ball go where you want it to go. It's amazing."–Rocco Mediate

"And you better watch yourself tomorrow, pal. See, he's a little nervous right now. He's nervous. It's going to be a blast, guys. I'm happy to be here. And we'll give you a show, I'm sure." Mediate, pointing at Tiger, who had just entered the media room.

"You are not human, Tiger," yelled a fan to Tiger. No reaction.

"Looks like I'm busy tomorrow. I think they'll understand." Tiger Woods, saying that he had a trip originally scheduled to Mexico to scout a golf course design project.

Tiger's roar sent GolfLasVegasNow.com back to the bright lights of Las Vegas, and covering the world class Las Vegas golf courses that make Las Vegas the Ultimate Golf City. But this 2008 U.S. Open at Torrey Pines had a true Vegas flavor. We hope you enjoyed our coverage.