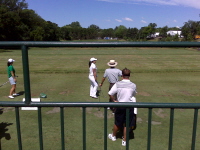 June 29, 2008–Las Vegas golfer Inbee Park is pictured warming up just minutes before her final-round tee time at the U.S. Women's Open, and is showing off an all-white outfit as she begins the final round two shots behind the leader, Stacy Lewis, who stands at 9-under par. Park, a former Bishop Gorman High School player here in Las Vegas, finished in a tie for fourth at the U.S. Women's Open last year, and is trying to become the first golfer with strong Las Vegas golf ties to win a major championship. But Park told the media after shooting a 2-under par 71 in the third round that she didn't have any special plans for the final round, a la Tiger's red or fellow LPGA Tour star Paula Creamer who goes pink. "Special plans?" she said, repeating a reporter's question. "No, I'm not too superstitious and I played good through the last three days, so I'll just keep doing the same thing and watch what happens tomorrow." But if she wins the Open today, it probably is safe to assume that Park will be wearing white a lot on Sundays. The photo was taken by Women's Southern Nevada Golf Association President Sherry Corsello who is serving on the television rules committee at the Open. As this was posting, Park chipped in for birdie on her first hole of the final round.

Park also said she was feeling very little stress even given her position on the leaderboard.

"I'm pretty comfortable right now," she said. "I don't know how I'm going to feel tomorrow. But at the moment I'm good. Usually I sleep very good before the tournament days."

Inbee Park is one of many true, yound LPGA Tour stars, and is competing in only her second season on the tour. She was a past American Junior Golf Association Player of the Year, and she won 2002 U.S. Junior Girls Championship. She earned more than $380,000 in her rookie LPGA Tour season in 2007, good for 37th on the money list.

The U.S. Women's Open is being played at Interlachen Country Club in Minnesota. LPGA Tour player Kim Hall was the only other player with Las Vegas golf ties to make the cut.