September 18, 2008–Paul Azinger, the 2008 United States Ryder Cup captain, recently made Las Vegas golfer Chad Campbell (he was an All-American at UNLV) a Captain's Pick, but Azinger's ties to Las Vegas golf and Las Vegas golf courses go back a lot farther than that. During the final round of the 1987 Panasonic Las Vegas Invitational, Azinger stood on the tee box of the par 5, 18th hole at Las Vegas Country Club with a goal in mind. He was tied with Hal Sutton and Curtis Strange. "'I wasn't thinking of eagle, but trying to make a birdie,'' Azinger told the media following the round. But eagle is exactly what Azinger made, rolling in a long and breaking 30-footer. He then narrowly avoided falling in the lake that fronts the green during his post-putt celebration. "'I can't believe that putt went in,'' he said later. For his efforts, Azinger won $225,000, the largest first-place check in PGA Tour history to that point. The Las Vegas event debuted on the PGA Tour in 1983 (Fuzzy Zoeller won) and quickly made news by becoming the first event with a million-dollar purse.

Sutton, the 2004 Ryder Cup Captain, was eyeing eagle on the tee and thought the 18th hole was playing very short. ''I knew one of the three of us would make an eagle on that hole,'' he said. ''It was playing like a par-4, sort of." Sutton made birdie to finish one shot out of the lead. The 1987 event is one of the highlights in Las Vegas golf history.

Azinger leads the 2008 U.S. Ryder Cup team against the Europeans at Valhalla in Kentucky, but is without Tiger Woods. On the 2008 team is Jim Furyk, who won the Las Vegas Invitational in 1995, 1998 and 1999, the only multiple champion in the tournament's history. This year the event is called the Justin Timberlake Shriners Hospitals for Children Open and will be played October 16-19 at Las Vegas golf course TPC Summerlin. The defending champion is George McNeil. 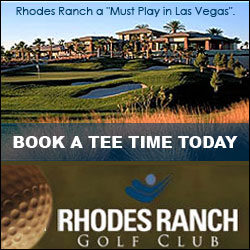 An Assistant Captain for Team USA is Raymond Floyd, who is the co-designer of TPC Las Vegas, a PGA Tour-owned Las Vegas resort golf course that is a past host to both the Champions Tour and PGA Tour. Floyd was the 1994 Las Vegas Senior Classic champion.

The quotes used from Azinger and Sutton are attributed to the New York Times article. The win was the second in his career for Azinger. Scott Hoch also won a $118,000 Rolls Royce during the 1987 event by recording a hole-in-one on the 17th hole. The prize was awarded by the Las Vegas Hilton, the hotel that shadows the 17th hole.