October 8, 2008–The adjacent picture is, indeed, worth a thousand words. Las Vegas LPGA Tour player Kim Hall has beauty and game, and now shows it off as the first member of the intriguing Wilhelmina 7, a group of LPGA Tour golfers being marketed by a modeling agency for both their play on the golf course and their appeal off of it. Hall, who plays out of Las Vegas Paiute Golf Resort, has enjoyed her time thus far as part of the exclusive group. "It has been a lot of fun," says Hall, who through 21 events in '08 has earned $168,000, good for 66th on the money list. "… It's drawing a lot of awareness to the LPGA, and to the fact that we are not only great golfers, but beautiful, outgoing, approachable professional athletes." Read on for a link to video of a recent photo shoot.

Wilhelmina Artist Management, a division of Wilhelmina Models, manages the new division aptly titled W7 – Wilhelmina 7. Seven of the top members of the LPGA Tour have signed exclusive representation agreements with Wilhelmina to seek out sponsorship and endorsement opportunities for the women as a whole package and individually. The opportunity was immediately accepted on the LPGA Tour with Minea Blomqvist, Sandra Gal, Anna Grzebien, Johanna Head, Mikaela Parmlid, and Stacy Prammanasudh joining Hall in the group. The group was recently featured on the TV show Inside Edition. Click now for a link to view the W7 video featuring Hall. Click the entertainment tab to view the video. 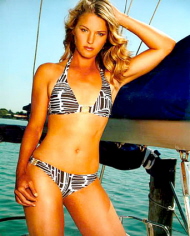 "It has brought some folks to the golf course that maybe wouldn't have otherwise noticed the event was even in town," says Hall about the W7. "The whole goal is to get women's golf, the LPGA in particular, more recognized in non-golf environments. That's where Wilhelmina comes in … they have a plethora of contacts and affiliations with the fashion and entertainment industries, so hopefully we can make women's' golf more mainstream. And even though it's a group of competitive beautiful women, we are still pulling for one another. If a few of the girls are playing well … it's still good for the group as a whole. Also, we are not just focusing on mainstream beauty and fashion endorsements, but engaging in charitable work as a group."

According to W7 Chairman Dieter Esch, Hall was a perfect choice to become the first member, and the whole idea grew from there. And he says that the W7 includes only those women with the game, the beauty and the personality to create a major presence in women’s sports, both on and off the course. "We created this initiative to complete a void in the marketplace for beautiful and athletically talented female golfers," says Esch. 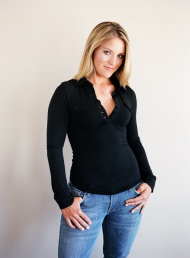 On the course, Hall has made six of the last eight cuts including a third-place finish at the Bell Micro LPGA Classic, good for a check of $92,500 a career best. Off the course, Hall is enjoying life and taking advantage of her new found fame. Hall graduated from Stanford University in 2003, where she played with fellow Las Vegas golfer and LPGA Tour player Stephanie Louden. She was a two-time Stanford MVP and was named All-PAC 10 three times during her collegiate career. She now lives in Las Vegas with Casey Hall, a former amateur golfer and high school player in Las Vegas.

Hall has embraced the Las Vegas golf community since moving to the area a couple years ago. She has played in the Danny Gans Partee Fore Kids and has attended other social events in addition to playing and practicing at some of the best Las Vegas golf courses.