"We believe that we provide one of the best values in Las Vegas," says Michael Lee, Assistant General Manager. "We offer good conditions and we are also dedicated to quality customer service and we want everyone to enjoy an all-around experience here at Las Vegas Golf Club." Visitors to Las Vegas can tee it up at Las Vegas Golf Club for no more than $79, and less on off times (preferred locals can play for less). In all, Las Vegas Golf Club, the city's municipal golf course, has undergone about $5 million in recent renovations.

The course at Las Vegas Golf Club is a traditional layout with trees, back-to-back fairways, and straight-forward holes. Basically, you'll find your golf ball and hit it again here, maybe with a tree or two thrown in to keep things interesting. On paper, the round of your life looks to be there for the taking, but tough and challenging greens and some stiff par 3 holes create plenty of intrigue. All Las Vegas golfers are welcome at Las Vegas Golf Club and you can easily book your Las Vegas golf tee times online at LasVegasGC.com. You can also click now to join the official Las Vegas Golf Club email club to receive special news and deals.

"This is one of the most player-friendly golf courses in Las Vegas, and is a course with minimal hazards," says Lee, who came to Las Vegas Golf Club after a stint as the Head Pro at The Trilogy in Phoenix. "It's a course that you can play with one golf ball and feel like you have a chance to shoot a really good score." Lee also says that the course is always open to groups, weddings or other events. And Las Vegas Golf Club offers a special Player Development Program that offers unlimited practice, golf tips and instruction. 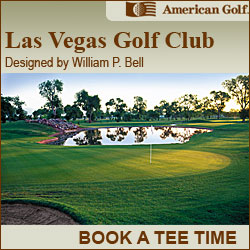 Tony G., who has been playing at Las Vegas Golf Club for five decades, says the following when asked recently about the 'new' Las Vegas Golf Club. “The golf course is in the best shape it has been in for 49 years.” Care to argue with a guy named Tony G. from Vegas? Another cool thing about Las Vegas Golf Club is that the players here know how to play, and the regulars like Tony G. who get out early and walk don't waste time and pace of play is usually not an issue here.

Las Vegas Golf Club was recently included in the 2008 Places To Play list by Golf Digest and in 2007 was recognized by The First Tee of Southern Nevada as the "Facility of the Year." The course and management open up part of the large lighted range to the kids of The First Tee of Southern Nevada each Thursday evening–in addition to other clinic dates–and make all feel welcome. On a recent Thursday, golf icon Lee Elder made an appearance and thrilled the kids and other onlookers with his wit and wisdom.

Las Vegas Golf Club is also the annual home of the Las Vegas City Amateur. Past champions of that event include PGA Tour players Robert Gamez and Craig Barlow, and former PGA Tour player Edward Fryatt, among other Las Vegas golf notables. And Monte Money–yes, that's his name–recorded an amazing course record of 14-under par, 58, many years ago. The record still stands … and was said to have been recorded as Money nearly downed a cold beer a hole.