There are about 70 golf courses in the Las Vegas golf region, and are operated with the assistance of PGA of America golf professionals, some who have been around the Las Vegas golf scene for more than 40 years. The Las Vegas Chapter is directed by President Mike Davis and Executive Director Paul Brown, in addition to a board that is made up by Las Vegas golf pros Chris Cain, Vice President; David Stead, Secretary; Matthew Grobe, Past President; and at-large board members Thom Blinkinsop, Ron Bosler, Amy Bush, Tommy Darland, Tom Fischer, Tom Leese, Joe Lescenski, and Tony Silva.

The Player of the Year in the regular division was Travis Long, who plays out of Lake Las Vegas Resort. In giving Long the award, Brown described his season as "Tiger-esque", and rightly so. Long entered 14 events, winning nine times and second four other times. For those not doing the math at home, Long finished in the top two in 13 out of 14 events, a record that would make Woods proud. Long also finished fourth at the overall Section championship that included pros from Arizona. Long's stroke average of 71.53 was also the best.

"I want to thank Paul (Brown) for all of the work he does to make this possible," Long said during his brief acceptance speech. "We just come and show up and play, and he does a great job for us. And I know he has put together a great schedule for us this year (2009) as well." Long also won the award following the 2007 season and is regarded as one of the finest golfers in Las Vegas.

UNLV Men's Head Golf Coach Dwaine Knight added to his huge inventory of awards by earning the Professional of the Year award. Knight has been the head coach of the UNLV golf team for 22 years, earning one team championship (1998) and helping two players–Ryan Moore (2004) and Warren Schutte (1991)–win the individual title. Knight is a former PGA Tour player, and will now display his new award with his other honors such as the Golf Coaches Hall-of-Fame and Southern Nevada Sports Hall-of-Fame plaques. (Knight (R) pictured with PGA of America professional Dave Johnson)

"I have to say this one is very special to me because I am very proud to be a member of the PGA of America," said Knight, who has also earned several coach of the year awards. "And this gives me an opportunity to thank all of you in the room because without you, the success we have had at UNLV wouldn't have been possible. There are so many pros that helped us get started so long ago. Guys like Joe Kelly, Dick Huff, Dave Johnson, Jerry Roberts, Don Welch and many others. I never would have thought 22 years ago that we could accomplish what we have. But you all share in our success because you are a major part of it."

Brady Exber, the current president of the Southern Nevada Golf Association (SNGA) and a member of the Las Vegas Golf Hall of Fame, was selected as the Person of the Year. Exber is a multiple SNGA Player of the Year but was nearly speechless when his name was called as the recipient of one of Las Vegas golf's highest honors. "I really had no idea, and I can't believe this … I'm not sure what to say," said Exber. "But I do know that this will have a special place in my house. On behalf of the Southern Nevada Golf Association, thank you very much for your support of amateur golf and for all that you do for the game." 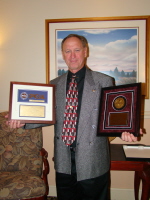 The Junior Golf Leader of the Year Award–both at the section and chapter level–went to Joe Kelly, who is serving his second year as the President of The First Tee of Southern Nevada and is the Director of Golf at Golf Summerlin. Kelly is one of the original founders of the Southern Nevada Junior Golf Association tour (1978), and is working hard to take junior golf in the Las Vegas area to the next level. Kelly declined an acceptance speech, but Brown made sure to note that it was extra special to earn the award at both levels. Among other initiatives, Kelly, along with the Las Vegas Chapter and The First Tee of Southern Nevada, is spearheading a new effort to help 40 of the best junior players in the area secure free ongoing lessons from Las Vegas' top golf instructors.

Past President Mathew Grobe earned the prestigious Bill Strausbaugh Award at the section level, a year after he won the award at the chapter Level. Grobe is the Director of Golf at the private DragonRidge Country Club, and has been active on the chapter board since 1999. The Strausbaugh Award is presented to PGA members who have shown outstanding integrity, commitment to mentoring PGA Professionals and have made a significant impact on the careers of PGA Professionals. The award also considers the member's service to the association, and involvement in community and charitable activities. "I am very honored to receive this award and I thank the PGA professionals that I have worked with over the years," said Grobe. "It is also very neat to see the pros in our chapter being recognized at the section level."

Former chapter executive director Amy Bush, the current assistant coach for the UNLV Women's Golf Team, was honored with the chapter Strausbaugh Award. Bush has worked dilligently on behalf of the chapter for several years, and continues to support the cause while helping to lead the women of UNLV. "Thank you very much for this honor, and on behalf of Missy Ringler and the UNLV golf team, we truly appreciate your support," said Bush. "And I believe we are some of the luckiest people in the world to work in and around the game of golf. This is a great honor."

The Senior Player of the Year went to the "youngster" Tom Fischer, who recently hit the magic age limit. Last year, Fischer, who works out of Red Rock Country Club, told Brown that his goal was to win the Senior Player of the Year honors. Fischer won the first two events of the year and added one more victory during the season. "My true first goal was to just make it to 50, and that's a chore in itself!" joked Fischer while accepting the award. "I am most proud of my consistency in competition while playing against some very good players. I also want to thank Thom Blinkinsop and Red Rock Country Club for the support they give me in allowing me to play in the events."

Kim Dolan, a longtime Las Vegas golf professional who now works out of Siena Golf Club, earned the Senior Player Stroke Average award with an average of 74. Dolan was the regular division Player of the Year last season in addition to Senior Player of the Year. "Thank you to everyone for playing in the events, and I hope to see even more players this year," said Dolan. Dolan has taught many of the best junior golfers in the area over the years.

Mike Davis earned his seventh-straight Teacher of the Year award, but was most proud of his and the board's work to move the chapter forward. "Even with the challenges of the world today, I have never been more excited about where we are as a chapter and where we are headed," said Davis. "I believe that all of the associations are on the same page and we are working together toward our common goals."

Also, Southwest Section Executive Director Curt Hudek spoke to the chapter and invited guests. "I believe the golf professional, especially during these challenging times, will be looked to even more to help grow and lead the game," said Hudek. "And I believe there will be more opportunities for the PGA of America and our golf professionals to become more involved and be part of the solution to some of the challenges." Hudek also mentioned that the PGA of America is about to launch a new teaching method/program called Get Golf Ready. It is a new major 5-week initiative that is launching this year that is designed to get more players involved in the game.