January 28, 2009–Long before Butch Harmon, the World's Best Golf Instructor, opened up the Butch Harmon School of Golf at Las Vegas golf course Rio Secco Golf Club, he was the personal pro for true royalty, Morocco's King Hassan II. Then he became the personal pro for true golf kings Greg Norman and Tiger Woods, among others. So it was an easy call for this writer to headline a VegasGolfer Magazine article, 'The King of Swing', and then to work with Las Vegas golf photographer J Rick Martin to convince Harmon to wear a crown and robe for a photo shoot. Well, easy to come up with the idea. More difficult to execute.

The year was 1999, and the photo shoot took place the day after Harmon had returned from the 1999 PGA Championship, where Woods had claimed the victory, his second career major, and fourth win in six events. When approached about the idea of wearing the 'King' costume, Harmon looked about as amused as any PGA Tour player who has the honor of playing with Tiger on Sunday in a final pairing. But after some discussion, and the photog and writer stating the reasons why the idea could work, Harmon warmed up to the idea and morphed into Tyra Banks on location. Harmon was–and still is–the true King of Swing, and we have the picture to prove it. 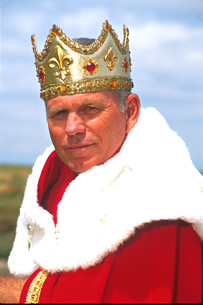 "I don't think we really believed he would go for the idea at the time, but we thought that if we could convince him, the photos would be priceless and would be something that had never have been done before," remembers Martin, who has gone on to work with Harmon on dozens of photo shoots in the ensuing years. "That was the first time I met Harmon, but over the years and I have watched him and he is a true professional in everything he does. That photo session is definitely one of the highlights of my career." Martin has also worked with the likes of John Daly, Natalie Gulbis, WINN grips, GOLF Magazine, and many others during a long career. He also shoots weddings, golf events, and personal portraits. Harmon was King Hassan's pro in the early 1970's, and survived two coup attempts and various other interesting scenarios during his time with the King. Hassan was an avid golfer who hired Harmon following the 1969 Moroccan Open. Harmon gave the King a bunker tip that apparently worked very well, and was put to work on the spot. Harmon traveled with the King and played many holes with his majesty.

And while Harmon has ended his professional relationship with the top-ranked Woods, he still works with top pro golfers such as Phil Mickelson, Adam Scott, Ernie Els, Natalie Gulbis, and Fred Couples. At one point last year, he was the pro for three of the top five male golfers in the world rankings. But it is interesting to look back and read Harmon's quotes about Woods, who spent many hours at the Harmon School in addition to playing Las Vegas' Rio Secco. Woods still holds the course record on the course, a 64 that was shot in very windy condtions the day before he left for Pebble Beach where he won the 2000 U.S. Open by 15 strokes.

Leading up to the 1999 PGA Championship, many in the press were writing off Tiger as a flash in the pan because he hadn't won a major since 1997. Many wrote that he was in a deep slump, despite the fact that he still had been in contention in several tournaments and majors. Harmon was stung by the harsh opinions, and also said that Tiger was hurt by the false words.

"He just can't win," said Harmon in the article that coincided with the photo. "No matter what he does, people criticize him. It's a jealousy thing and it's a racial thing. There are a lot of factors behind what people write. For people to write that Tiger is in a slump or overrated you have to be a fool. It's mind boggling to us. It bothers him when people write negative things when he knows how hard he's worked. He's been on the PGA Tour for three years, and he's won two majors. That's a career for most guys … he is truly the best player in the world and all he wants to do is get better. We're just seeing the tip of the iceberg with Tiger. That's a scary thought but I know he can get so much better."

Well, it looks like Harmon predicted that one correctly. Some of the reasons that were given to Harmon as to why the 'King' idea would work are even more ture today. In addition to continuing to work with the game's best players, his fellow golf instructors have voted him as the best teacher for several years running in a Golf Digest poll. Harmon has also collected several VegasGolfer Magazine Fairway Awards for teaching excellence, and helped cure the swings of many an everyday player. Plus, Harmon comes from golf royalty as his father was a former Masters champion, and his brothers are teaching professionals. His father passed away many years ago, while one of his brothers, Dick, died in 2006.

And, just recently, Harmon has thrown his support behind a new program initiated by The First Tee of Southern Nevada. Harmon and about 10 other Las Vegas PGA of America professionals are donating their teaching time to about 40 of the best junior golfers in the area in hopes of helping to secure college golf scholarships for the youngsters. Harmon is a big supporter of junior golf, and has a tournament series named for him as part of the Southern Nevada Junior Golf Tour.

The Harmon School of Golf is open to all golfers, and players can book complete golf schools with Harmon and/or his fine staff of professionals. In addition, hotel stays and golf is available through Harrah's Golf. You can book your Las Vegas golf tee times and golf packages at HarrahsGolfPackages.com. And Martin is available for hire for both golf and non-golf related photo shoots. He has been working in the Las Vegas area for more than three decades.–Writer Brian Hurlburt is the former Publisher and Editor for VegasGolfer Magazine.