February 25, 2009–Last year, the National Golf Foundation published a survey that determined that the total direct, indirect and enabled economic impact of the golf industry in the United States was $195 billion annually. Or, in other words, larger than the motion picture, newspaper and spectator sports' industries. And this week, in celebration of Nevada Golf Day at the Legislature, leaders of the Nevada Golf Industry Alliance (NGIA) took that study and others to Carson City, Nevada, to educate the state's lawmakers on the positives that golf brings to Nevada.

The event was the first official function for the new organization, and started with a special reception on Monday, February 23, for lawmakers at Duke's Steakhouse at the Casino Fandango, a favorite spot for Nevada's political leaders. The mission of the NGIA is to improve business conditions for the golf industry in the state of Nevada by serving as an educational resource for the industry and the public, by serving as an advocate for the industry before the state legislature and other governmental bodies, and by communicating to the public the economic benefits and environmental stewardship provided by the game of golf.

On Tuesday, leaders of the NGIA spent the day at the legislature speaking individually to key political figures and testifying to specific committees. NGIA representatives from the Las Vegas golf area who made the trip included NGIA President PJ Mcguire, a member of the Nevada Golf Course Superintendents Association; Vice President Brady Exber, the current president of the Southern Nevada Golf Association and a member of the Las Vegas Golf Hall of Fame; Secretary/Treasurer Stan Spraul, the current president of the Nevada Golf Course Owners Association; and board member Chuck Bombard, a PGA of America golf professional. Also at the events were Nicole Dutt, Executive Director of the Southern Nevada Golf Association and Danielle Gladd, Executive Director of The First Tee of Southern Nevada, among others.

In a brochure given to several lawmakers, the following was included: "Though many may look at golf as solely a recreational activity, further examination reveals the sport delivers tangible assets to communities financially, environmentally and socially." Some of the more compelling numbers are that more than two million jobs are created by the golf industry, accounting for more than $61 billion in wages. And more than $6.5 billion was generated for worthy charities by the golf industry in 2008. 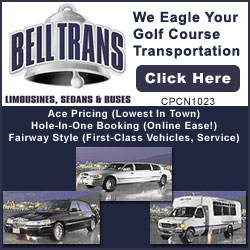 “This data provides a roadmap for the continued growth and health of the golf industry in this country,” said Steve Mona, CEO of the World Golf Foundation. “One of the most exciting developments of the last several years has been the ability to take the economic impact template for this national report and apply it at the state level. Already, we’ve seen a number of states begin to produce and publicize their own reports. This offers those states several important benefits, including an improved ability to secure public support for increased golf tourism promotion, as well as positively impacting legislation that can benefit golf facilities. We expect to see a significant increase in this research and reporting activity at the state level in this next five year period, which should certainly be reflected in the next U.S. Golf Economy Report.”

On a more local level and specific to Las Vegas, nearly 4,500 people are employed by Las Vegas golf courses, and more than a $1 billion tangible econimic impact can be felt in the Las Vegas area. That number increases substantially when more intangibles such as real estate values, charitable impact, spending by tourists, etc. are factored into the economic equation. “Golf is a critical part of the economy and it’s important that we nurture it,” says State Senator Bob Coffin, who helped set up the meetings. “It’s too bad that it seems like we need to be protecting the industry on many fronts, but some believe that golf is just a whimsical recreational activity, but it’s very important for many reasons.”

The group also was quick to note that no other industry is as pro-active when it comes to the conservation of the state's most vital resource, water. In the last several years, Las Vegas-area golf courses have removed millions of square feet of grass and conserved well more than 1 billion gallons of water. Plus, the industry is a leader in irrigation technology and shows the way when it comes to best practices. NOTE: The pictured course is TPC Summerlin, host course for the PGA Tour's Justin Timberlake Shriners Hospitals for Children Open.