May 1, 2009–The impact of a man is sometimes best measured on the impact he makes on those around him. For Las Vegas entertainer Danny Gans, who died this morning, his positive impact could begin to be measured by taking a look at the smiling faces of the many Las Vegas kids who were introduced and learned the game of golf–and the life skills and core values it instills–via the Danny Gans Junior Golf Academy, a program that he founded and operated in conjunction with The First Tee of Southern Nevada and the Southern Nevada Junior Golf Association. He will be deeply missed by the Las Vegas golf community. Danny Gans lived huge from 1956-2009.

The Academy and The First Tee of Southern Nevada clinics focus on helping kids to learn the game of golf, but the underlying keys to the clinics are words like respect, integrity, honesty and other words that help guide kids through life. Gans donated financially to junior golf, hosted the annual Danny Gans Partee Fore Kids golf event, and represented Las Vegas by playing in PGA Tour celebrity pro-am events like the Pebble Beach National Pro-Am, where he garnered a ton of national air time during the CBS telecast. “Providing kids the tools they can use to learn core values such as honesty, integrity and perseverance is truly a blessing,” Gans said in the past about being involved with the kids of the junior golf program. Gans also was very involved with many other Las Vegas charitable organizations. Click now for a very nice video tribute to Gans and his impact on the community.

Golf was a passion for Gans, who had a personal locker at Shadow Creek when he was a performer at The Mirage. When he recently moved to the Encore, Steve Wynn again rewarded Gans with a personal locker at the Wynn Golf and Country Club. The last time we spoke, Gans said he was very excited about playing Wynn, but was so busy preparing for the opening that he hadn't had much of an opportunity to play the beautiful Tom Fazio course. Hopefully, since the opening at Encore on February 6, he took the time to enjoy it. Gans' annual charity golf event was attended by such names as Greg Maddux, Mike Maddux, Kevin Sorbo, Louie Anderson, George Wallace, Don Shula, Marty Barrett, Ron Roenicke, Robert Gamez, Erica Blasberg, Craig Barlow, Randall Cunningham, Rollie Fingers, John Ensign, Reggie Jackson, and many others. Gans was a single-digit handicap.

"Danny Gans will not only be remembered as a Las Vegas entertainer, but as a man who loved his family, loved God, and loved the City of Las Vegas," said Chip Lightman, his longtime manager and business partner, in a statement. "Danny Gans has been my partner and dear friend for over 18 years, I will truly miss him. My thoughts and prayers are with his wife of 28 years, Julie Gans, and 3 children, Amy, Andrew and Emily."

By early Friday morning, The First Tee of Southern Nevada had posted a photo of Gans with members of the organization, in addition to the folowing statement. "Goodbye friend. It is with a heavy heart we have lost such an amazing man. Danny was our biggest supporter and more importantly a friend of The First Tee of Southern Nevada. Through our Danny Gans Junior Golf Academy and our Partee Fore Kids, he touched the lives of thousands of young people in Southern Nevada. Our thoughts and prayers are with his wife Julie and their three children, Amy, Andrew and Emily. We will miss you!"

The lasting impression of Gans for this writer will be of Gans, proudly sitting in his dressing room at The Mirage a few years ago, with his daughter Emily by his side, smiling and helping her Dad film a commercial for his annual golf tournament, an event that for two years was an official pro-am for Las Vegas' PGA Tour stop. At the end of the commercial, Emily looked up with a huge smile and said, 'Thanks, Dad.' Looking down as only a doting Dad can, Danny replied back, "Thanks, Emily!". And this writer can't think of a better statement to say to Danny and his family at this challenging time … Thanks, Danny. And that's about all this writer can pound out on a keyboard at this time because it's tough to see a screen through tears. —Brian Hurlburt. 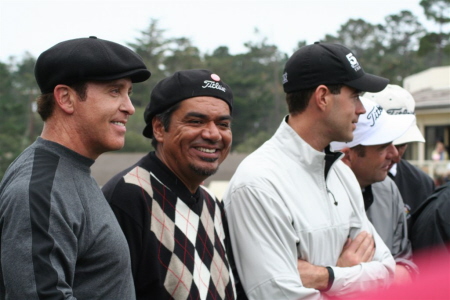