May 17, 2009–About halfway through their set, No Doubt, headliners of Tiger Jam XII presented by AT&T, broke into one of their hits, "Running", an inspiring ballad featuring lyrics "Running, as fast as we can", describing an attempt to keep the pace. During the song, a large screen showed old video from the band as they traveled and made themselves into one of the world's biggest bands. It was hard not to think about the same road that Tiger Woods has traveled, making himself into one of the world's biggest stars, from a young kid winning U.S. Amateur titles to a 20-year old winning his first PGA Tour event in Las Vegas (1996 Las Vegas Invitational) to a 33-year old in Las Vegas this past weeked for his 12th Tiger Jam, with a goal, as he stated, to help "10 million kids live better lives." 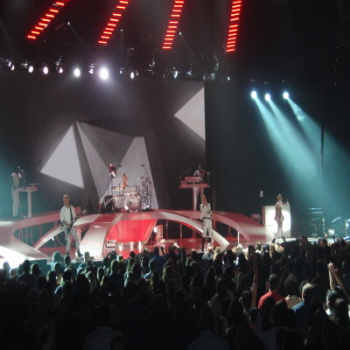 Following solid sets by opening acts The Sounds and Paramore, Roethlisberger took the stage and was greeted by cheers and a smattering of boos, to which he replied, there must be some "Steeler haters out there". Roethisberger then took out a piece of paper, and for a second, began a serious speech before saying, "Aw, forget this … Tiger Woods!" The world's greatest golfer then took the stage, said a few words about the important mission of his foundation, before ducking off stage after welcoming No Doubt to the stage.

Stefani thanked Tiger during her performance, saying, "Thank you, Tiger, this is so amazing!" Stefani also commented that, in life, you always remember your firsts, and since this was the first concert of the new tour, the band would always remember Las Vegas, and that the crowd was doing a good job of making it a positive memory. Stefani was a commanding presence on the stage, continually bounding and dancing from one side to the other, doing 10 push ups at one point, and then thrilling the audience when she ran from the stage, through the crowd, before ending in the middle of the fans at the far end of the arena where she implored the fans to sing her major hit, "I'm Just a Girl". No Doubt played seemingly every major hit during the show before ending, appropriately with "Sunday Morning" as the clock was about to hit midnight on a Las Vegas Saturday night/Sunday morning. 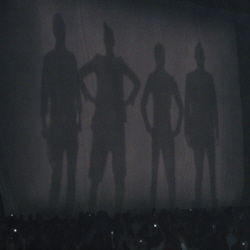