May 20, 2009–Completing the circle of coverage of Tiger Jam XII (click for concert report) for Golf Las Vegas Now, is this posting of the official press release from the Tiger Woods Foundation. The release reveals that the event raised more than $1 million for the Tiger Woods Foundation. Also, read on to view more official photos from the Tiger Jam that was headlined by No Doubt and attended by P. Diddy, Dwyane Wade, and many others. Golf events at Las Vegas golf courses Cascata and Rio Secco Golf Club also highlighted the week.

Grammy Award Winners No Doubt kicked off their first tour in five years, taking the stage at the Mandalay Bay Events Center in Las Vegas as part of Tiger Jam XII presented by AT&T*, a fundraising event hosted by Tiger Woods. The band joined Tiger on Saturday, May 16, 2009, helping to raise more than $1 million for programs of the Tiger Woods Foundation. 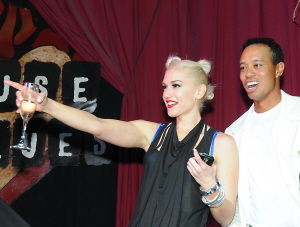 Prior to the rocking concert, VIP guests attended the Tiger Jam XII reception, sipping on signature GREY GOOSE® Vodka and delicious hors d'oeuvres before enjoying a gourmet dinner. Saturday night’s festivities included an exciting live and silent auction, featuring luxury packages such as an all-inclusive trip to Australia coupled with a private dinner with famed cricketer Steve Waugh that raised $60,000; a one-of-a-kind 2010 Grammy Package which raised $70,000; and a Bruce Springsteen autographed guitar that raised $50,000.

Celebrities ranging from the Superbowl-winning Pittsburgh Steelers quarterback, Ben Roethlisberger, to music mogul P. Diddy, joined Tiger in celebration of the Foundation’s 12th benefit event. Three students from the Tiger Woods Learning Center spoke about their experiences and goals for the future, including how the Learning Center changed their lives, helping them realize that anything in life is possible.

About No Doubt: Formed in Anaheim, CA, No Doubt reached international success with their 1995 release Tragic Kingdom. That album, including the mega hit "Don't Speak" among many others, has sold over 15 million copies worldwide. Their follow up, Return of Saturn, was nominated for the Best Rock Album at the 2001 Grammy Awards and granted a four star review by Rolling Stone Magazine. The band went on to win two Grammy Awards for 2001's multi-platinum Rock Steady and performed at the Superbowl XXXVII Halftime Show in 2003 alongside Sting. 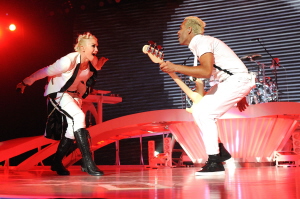 After the double platinum success of No Doubt's Singles Collection, featuring the hit "It's My Life," and a subsequent tour with Blink-182, lead singer Gwen Stefani released two successful solo albums in 2004 and 2006 respectively. In November of 2008, after a nearly 5 year hiatus, No Doubt announced plans to reform for a 2009 summer tour with special guests Paramore. 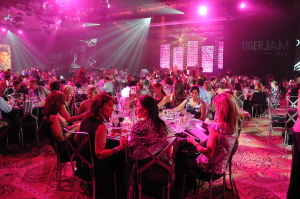 Specific programs of the Foundation include the Tiger Woods Learning Center, a youth-education facility and curriculum based in Anaheim, Calif., and Tiger’s Action Plan, a nationwide character development program based on Earl D. Woods’ book entitled Start Something. Tiger’s Action Plan is a free program for youth 8-17 that addresses three priorities: character education, volunteer service and career exploration. More information on the Tiger Woods Foundation and its programs can be found at www.tigerwoodsfoundation.org.

About AT&T: AT&T Inc. (NYSE:T) is a premier communications holding company. Its subsidiaries and affiliates – AT&T operating companies – are the providers of AT&T services in the United States and around the world. With a powerful array of network resources that includes the nation’s fastest 3G network, AT&T is a leading provider of wireless, Wi-Fi, high speed Internet and voice services. AT&T offers the best wireless coverage worldwide, offering the most wireless phones that work in the most countries.  It also offers advanced TV services under the AT&T U-verseSM and AT&T │DIRECTVSM brands. The company’s suite of IP-based business communications services is one of the most advanced in the world. In domestic markets, AT&T’s Yellow Pages and YELLOWPAGES.COM organizations are known for their leadership in directory publishing and advertising sales. In 2009, AT&T again ranked No. 1 in the telecommunications industry on FORTUNE® magazine’s list of the World’s Most Admired Companies. Additional information about AT&T Inc. and the products and services provided by AT&T subsidiaries and affiliates is available at http://www.att.com.

About Live Nation: Live Nation's mission is to maximize the live concert experience. Our core business is producing, marketing and selling live concerts for artists via our global concert pipe. Live Nation is the largest producer of live concerts in the world, annually producing over 22,000 concerts for 1,500 artists in 57 countries. During 2008, the company sold over 50 million concert tickets and drove over 70 million unique visitors to LiveNation.com. Live Nation is transforming the concert business by expanding its concert platform into ticketing and building the industry's first artist-to-fan vertically integrated concert platform. Headquartered in Los Angeles, California, Live Nation is listed on the New York Stock Exchange, trading under the symbol "LYV".