July 8, 2009 (UPDATED JULY12) –Inbee Park, a two-time Nevada State High School Champion while playing golf for Las Vegas' Bishop Gorman High School, defends her 2008 US Women's Open title this week at the par 71, 6,740-yard Saucon Valley Country Club in Bethlehem, PA. Park, who has played a lot of golf at Las Vegas' Badlands Golf Club, became the youngest champion in Open history last year when she won the title at 19, and is looking forward to the challenge of 2009. "I think (the course) definitely favors the long hitters," Park said during her pre-tournament press conference. "I mean, the course is playing fairly long, even without any rain." LIVE RESULTS. Park was 10-over par after three rounds and looked very unlikely to repeat.

UPDATE: Women's Southern Nevada Golf Association President Sherry Corsello was at the Open serving as a television volunteer where she was assisting the on-course camera operator following the leaders establish position and move through the course. Corsello spent a bit of time with the Park pairing on day one, reporting back by email that Park was struggling and looked frustrated by her play. "Not a good day," Corsello reported. "Greens were very unduly. Difficult to hold. Park was firing at pins but couldn't make a putt. In numerous greenside bunkers. She seemed a bit frustrated. Seemed to be hitting good tee shots just couldn't capitalize."

"It's pretty dry out there right now, but it's playing a bit long. If it gets any rain, it's definitely advantage for longer hitters. I would say around the greens, the good putting players will have a good week, too, because there's a lot of breaks on the greens, and you really have to read the greens very good." Park is struggling in 2009 as she enters the event 58th on the LPGA Tour money list and with a best finish of 14th at the LPGA Championship, but she thinks things are changing.

"I think I really feel like my game is coming back since last month," said Park, who also said she is driving the ball about 15 yards longer, opn average, than last year. "It's coming back, and I been really preparing myself to play in this event, and this is the event. This is the event I've been waiting all year. I mean, all last year and all this year I've been waiting to play in this event. I'm very excited to be here, and this course really reminds me of the last year's course. I mean, I'm just very thrilled to be here, and I'm looking very forward to playing." 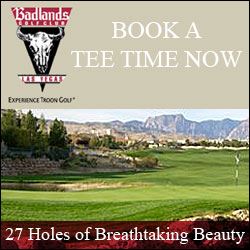 US Women's Open Las Vegas golf notes: Former University of Nevada, Las Vegas (UNLV) golfer Sunny Oh is also in the Open field. Oh has played in one LPGA Tour event in 2009, missing the cut. Entering the Open, she was 64th on the LPGA Tour Duramed Futures Tour money list. Among her many achievements at UNLV was an 11th place finish at the NCAA Championship, a victory at the 2003 NCAA West Regional, top ten finishes in half of her events played in 2002, and a win at the 2004 Mountain West Conference Championship. She was ranked as high as 16th nationally and was the conference player of the year in 2004 when she won five events.

Las Vegas golfer Natalie Gulbis is missing her first US Open in eight years. Gulbis, who finished 4th at the Open in 2005, missed out on exemption when the USGA changed the guidelines for this year. Gulbis was 26th on the money list at the time of exemptions–she is now 33rd–and only the top 10 through June 1 earned exemptions, while the top 50 from 2008 were also granted invites. Due to injuries, Gulbis finished 56th on the list in 2008. But Gulbis was still making big news as Golfweek reported that she was one of several LPGA Tour players who signed and sent a letter to the LPGA Tour board requesting the resignation of LPGA Tour commissioner Carolyn Bivens. Some of the other players reportedly signing the letter included other big guns Lorena Ochoa, Paula Creamer, Cristie Kerr and Morgan Pressel. Much more on this is sure to come. The LPGA Tour is losing events and players have been unhappy with how the commissioner is operating the Tour.