July 15, 2009–Angel Park Golf Club is the home of two Las Vegas golf courses designed by Arnold Palmer, and the courses were the site for the annual Cleveland Golf Pro-Scratch, where the two-golfer team of pro David Stead and scratch player John Hahn claimed the title after surviving a four-way sudden death playoff. Stead is the director of golf at Angel Park, while Hahn is a regular golfer at the OB Sports facility. The duo fired rounds of 63-68 over the Palm and Mountain Las Vegas golf courses, and then birdied the first playoff hole (Mountain, 18) to seal the win. Angel Park is a Las Vegas resort course where deals and golf packages are available for all Las Vegas golfers.

Stead and Hahn ended tied with Joel Kijowski and Clayton Yadda (64-67); Mike Ruiz and James Logeman (65-66) and Jake Ellison and John Busby (67-64). “We both had it going in the first round,” said Stead. “We each made an eagle on the back nine and opened with a solid 63 that put us in the top position. We played well the second day to post a 68 and John came through big-time. He actually birdied 17 and 18 to get us into the playoff and then made a clutch birdie putt to seal the win. So actually he birdied the final three holes we played.”

Angel Park Golf Club is one of three Las Vegas golf course facilities operated by OB Sports, and is billed as the world's most complete golf experience because of the combination of Las Vegas golf amenities available such as a real-grass putting course, lighted par 3, clubhouse, a vast and lighted practice area, event lawn, and more. Click now to view the official website or to reserve your Las Vegas golf tee times. Or you can click to VegasGolfCentral.com for information on all OB Sports Las Vegas golf courses that include Legacy Golf Club and Aliante Golf Club in addition to Angel Park.

For their efforts, Stead earned $1,400 in cash and Hahn earned $750 in Angel Park gift certificates. The 2009 Cleveland Golf Pro-Scratch is a two-person better ball with each team comprised of one professional and one “scratch” amateur competing for a total prize purse of more than $15,000. This event draws teams of golf professionals and amateurs from all over the country as teams travel from California, Arizona, Washington and as far away as Hawaii and Florida to compete. Notable Las Vegas pros such as Robert Gamez, Jeremy Anderson and Ed Fryatt have also played in the past. 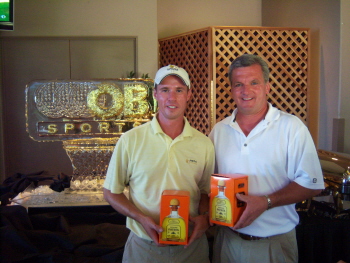 “Congratulations to David and John and congratulations to the entire Angel Park team who put on a truly great event that didn’t disappoint,” said Phil Green, President of OB Sports. “Also thank you to the event sponsors who continued to support what is turning into one of the most popular two-player events in Las Vegas.” The title sponsor of the event is Cleveland Golf, the host resort is the Bellagio and other presenting sponsors included Club Car, Grey Goose, and Southern Wine and Spirits.

Following the first round of play, the “Cloud Nine Derby Shoot” kicked-off.  The field is limited to the top 15 teams that prepaid at registration prior to the first round. This fun-filled “event within the event” is part of local lore as the 1996 Cloud Nine Derby featured an exciting hole-in-one by local touring professional Robert Gamez on the first hole. This year the team of Mike Ruiz, a former UNLV golfer, and James Logeman won the event and the $600 first prize.