August 20, 2009–Las Vegas and the golf courses in this region have played host to nearly 100 different PGA Tour, Champions Tour and LPGA Tour tournaments over the years, an amount that catches a lot of people by surprise. One of the courses at the epicenter of those big events is the historic Las Vegas Country Club, a private equity course nestled in the heart of the city. And now, the members are going back to the future by spearheading a $5.6 million renovation that includes 18 new greens and complexes, a 19th hole to decide bets, dramatic bunkers, a garden spot for weddings, and other surprises.

The project is being overseen every step of the way by respected golf architect Mark Rathert, who is also serving as the manager of the entire deal, kind of a first for the industry. As such, Rathert is putting every ounce of his heart and soul into it. The new course should be ready for play by the end of the year. The renovation was needed because a large outbreak of Pythium (water mold) in 2008 destroyed nearly every green. The members decided not only to create new Bent grass greens but to modernize the layout, basically adding shine to an invaluable antique.

The club came onto the Las Vegas golf scene in 1967—built by Boston Celtics owner Marvin Kratter on the grounds of the old Las Vegas Downs horse track—and ever since has been the fodder for just about all things Las Vegas. From opening as one of just a handful of Las Vegas golf courses at the time to being the playground of Las Vegas’ celebrities and the who’s who of the city to Paul Azinger’s dramatic eagle putt on the 18th green to win the PGA Tour’s 1987 Las Vegas Invitational, the country club has developed a reputation far beyond the green fairways that sprawl in the shadows of the legendary Las Vegas Hilton, former home to Elvis and other big-time acts. Among the champions to win tour events at Las Vegas Country Club besides Azinger are Greg Norman, Curtis Strange, Lorena Ochoa and many others.

It’s fairly safe to say that not only was the club a popular spot for private golf in the area, but was the spot for power brokers such as Steve Wynn, Irwin Molasky, and Hank Greenspun to come and firm-up huge deals (many with a handshake), and for the pretty people to party and see and be seen. And then there was the more notorious element who gathered for golf and card games that included the likes of Moe Dalitz, Tony Spilotro, Frank Rosenthal, and other unique Las Vegas characters.

“For a strong 20 or more years the Las Vegas Country Club was the social hub of Las Vegas, and many of the major business meetings of the time took place either in the clubhouse or on the golf course,” says Jack Sheehan, a nationally-renowned golf author who lives in Las Vegas. “And the membership roster was a who’s who of Las Vegas VIP’s on both sides of the law. At the time it was the only private club in town and a very desirable membership to possess. And if you weren’t a golfer, you were a social member. In those days, I would’ve given a body part to have been a member there.”

And now a new throng of members—with support from some of the old guard—are working to rekindle the spirit and essence from the heyday of the place that debuted as Las Vegas International Country Club and was originally designed by Ed Ault. The membership is a resilient group that has watched while more than 50 golf courses have been added to the region since the club opened more than four decades ago. The member-owners have also passed up purchase offers—one for a reported $52 million from Wynn—and remain devoted to the club. A vote by the membership overwhelmingly approved the renovation, and when it is all said and done, each member will be assessed an amount that is well less than $100 per month. 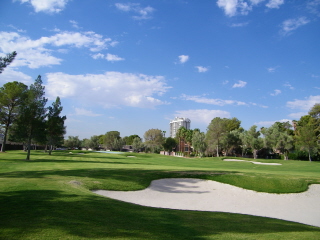 The overall membership is represented in the process by a committee made up of local attorney Dan Albregts, Oakland A’s announcer Ken Korach in addition to business leaders Cliff Buckley and project chairperson Leo Durant, among others. But the key person in this multi-million dollar Vegas golf gamble is Rathert, a 30-year veteran of the design business.

“For me personally, this is the first time in my career that I have taken on a project on a day-to-day basis, and not only is that unique for me but also for the industry as a whole,” says Rathert about re-working a course that has hosted events on both the LPGA Tour and PGA Tour. “It’s been a dream of mine to do a project in this manner, but the nature of golf architecture really doesn’t allow for it. This has been very rewarding for me and I appreciate the opportunity.”

Rathert’s passion and dedication were a huge reason he was chosen to bring Las Vegas Country Club into the 21st century. “We thought to ourselves as a committee that if this project was that important to him then we were very comfortable starting a partnership with him,” says Albregts, who is also the president of the UNLV Rebel Men’s Golf Foundation. And General Manager Ryan Shaw has watched Rathert work sun-up to sun-down, nearly seven-days-a-week, crafting his ideas and adjusting as needed.

“The main aspect of this is that this club has great history and tradition and this renovation is designed to preserve that while bringing in new greens, technology and drainage,” says Shaw, who came to Las Vegas Country Club from Arrowhead Country Club in Arizona. “There are also some layout changes but Mark has been successful in keeping the traditional look to the course, and that’s very important. Mark has tremendous vision and his dedication has been a huge key.”

The course has a classic feel to it with plenty of grass and trees. It’s a golf course in the desert, and in no way a desert golf course. Rathert’s overall philosophy is a “return to classic design”, and he is staying consistent to that throughout the layout while also creating different shot values on the holes. “Five of the holes will now favor a fade, six holes will favor a high hook and seven can be played either way, depending on hole position,” says Rathert. “And we have created a bunker style similar to a Winged Foot or Oakmont, where they haven’t gotten crazy with bunker slope. That type of bunkering fits a classic look very well. This is a classic, park-like course and we definitely don’t want to change that character.”

Some of the specific changes—not including the new greens and complexes surrounding the putting surfaces—are moving the green back on the 6th hole, a higher tee on the par 3, 7th hole, and a more pronounced dogleg-right feel on the par 5, 18th in addition to a new tee. Also, more than 100 trees were removed, several bunkers added or moved, and certain turf areas have been replaced with native vegetation.

Much like the city of Las Vegas has in year’s past, Las Vegas Country Club is undergoing a revitalization. But in the minds of the current members, it is one that will continue to pay homage to history and tradition while embracing a brighter future. Thus allowing the myriad of stories to continue to be told about a true Las Vegas golf monument.–Brian Hurlburt, Founding Editor.