December 5, 2009–Las Vegas is the home to some of the biggest events in the world, and this week is no different with the National Final Rodeo, NASCAR Champions Week, and the Las Vegas Rock 'n Roll Marathon all taking place. And some Las Vegas golf courses are the site where some big-time celebrities are playing in Las Vegas golf tournaments including George Strait, Kurt Busch, and Butch Harmon, among others.

Country legend George Strait was the headliner of the Tough Enough To Wear Pink Golf Classic presented by Wrangler at Las Vegas golf course Cascata, and was joined by Las Vegas' own Butch Harmon, who gave a clinic before the round, and former major league pitcher and current ESPN analyst Rick Sutcliffe, along with a true NFR celebrity, Peter Coors, of Coors beer fame. Coors hit a pretty nice drive–while not wearing golf shoes–when called up by Harmon during the clinic. The golf event coincides with the annual National Finals Rodeo, basically the Super Bowl of the rodeo world. Thousands flock to Las Vegas each year for the event, and every session is a sell out.

Harmon also watched as Strait striped one about 230 yards down the driving range, prompting Harmon to say, "This is the easiest clinic I've ever done … everybody's hitting it perfect!" Each guest of the event was given a pink shirt, and Harmon was in the spirit and wore pink during the clinic. Cascata is a Las Vegas resort golf course that is open to all Las Vegas golfers. Click now for the official Cascata–designed by Rees Jones and top-rated course by ZAGAT–website. Funds raised benefited the fight against breast cancer. Harmon operates the Butch Harmon School of Golf at Las Vegas golf course Rio Secco Golf Club.

The private Las Vegas golf course DragonRidge Country Club was the site of the Golden Golden Gaming Golf Tournament hosted by Kurt Busch. "This tournament is a great way to have a good time with friends while playing for a good cause," said Busch. "It's always nice to see the support the foundation gets in my hometown of Las Vegas.". Busch–along with brother and fellow NASCAR star Kyle–grew up in Las Vegas. Kurt was once featured on the cover of VegasGolfer Magazine in a custom-painted golf cart. DragonRidge Country Club is located in the MacDonald Highlands community and was designed by Dave Druzisky and Jay Moorish. Click now for video of the event from Yahoo.com. Funds raised from the event benefited the Kurt Busch Foundation, an organization with a mission of  lending meaningful support for the betterment of organizations positively involved in the areas of health care, education, career training and rehabilitation. The top NASCAR stars are in Las Vegas for the annual awards banquets and other special events, the first time the city has been the site for the events. 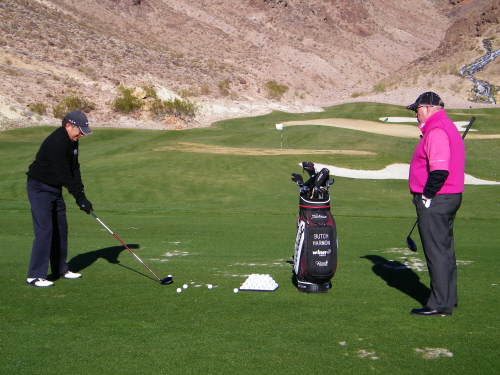