December 9, 2009–You pretty much get the truth from Las Vegas golfer Chris Riley, who was a 4-time All-American at UNLV, and who still lives some of the time in Las Vegas. And Riley, who finished in a tie for 19th at the PGA Tour Q-School to earn his 2010 PGA Tour card, says that his final round play this year stinks, but he will get it figured out for next season.

"It has been a very tough year for my finishes," says Riley, who was in contention in several 2009 PGA Tour events but could never close the deal. "And unfortunately I didn't finish well at Q-School either, but in looking at the overall picture I am happy with the way I played. My goal going into the event was to win, but the whole atmosphere of the event changes after the first five rounds. Everyone is joking around for the first five days, but then it gets hard to breathe for round six and nobody is talking. It's like you are wearing a noose around your neck and each day it gets tighter until round six when it's squeezing tight. It's like a totally different tournament from round five to round six." Riley fired rounds of 71-71-65-71-68-76–422 at Q School, and then commented that he was "leaking oil" coming in on Sunday. 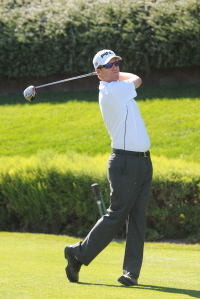 Looking closely at Riley's stats does show he didn't play as well as he could have on Sundays when it arguably mattered the most, but he also had some solid rounds on Sunday to move up the leaderboard or secure some top finishes. Riley was playing well at the Mayakoba Classic, but then fired a 76 on Sunday to finish in a tie for 28th. He also opened with rounds of 67-67-66 at the Travelers Championship but closed with a 70 to finish in a tie for 23rd. Then in back-to-back weeks in August, he was playing well at the Reno-Tahoe Open and the Wyndham Championship, but shot final rounds of 73 and 74 respectively to finish in a tie for 17th and a tie for 13th. A solid final round in any of those events probably would have been good enough for him to finish in the Top 125 on the money list and forego a trip to Q School. As it was, he finished 129th on the final money list.

But on the positive side of things, Riley did fire rounds in the 60s in 9 of the 16 Sunday rounds that he played in 2009, but in his mind, those rounds probably came when the pressure wasn't as strong. And as far as the stats go, Riley's final-round scoring average was 70.35, good for a respectable ranking of 52nd on the PGA Tour. Overall, his scoring average was 70.13, good for 17th on the PGA Tour. "Next year I need to learn how to play better on Sunday," says Riley, the champion of the 2002 Reno-Tahoe Open. "It's like my swing changes on Sunday, and also it seems like I get more nervous the older I get. But I am playing well and I am embracing the challenge." Riley has won nearly $10 million during his long career.

Riley even admitted to playing the final round of Q School as he did when he was battling Sergio Garcia and others for the Wyndham title before faltering (at least there was a silver lining there as fellow UNLV alum Ryan Moore won the event). "I was scared, just like I was in Greensboro playing with Sergio," says Riley. " I think it's a mental thing, and I may talk to somebody about it, but I also welcomed the nerves this past week at Q School  because I know that is what I have to experience to win again."

Riley also is perplexed with the difficult finishes because while at UNLV, Hall-of-Fame Head Coach Dwaine Knight always stressed to his players the importance of finishing strong in any given tournament, whether to benefit the team score or secure a solid individual finish. "I always joke with Coach that I try to finish like a Rebel, but I'm just not doing it," says Riley. When a writer suggested that maybe he should reflect more on his college days for inspiration, Riley took a moment to remember that Knight made the team run laps whenever they had an overpar finish. Then Riley thanked the scribe for possibly helping with a key to unlocking better finishes. But he didn't say whether he was going to be bringing his jogging shoes with him on the road next year. PHOTOS: Steve Spatafore. Writer: Brian Hurlburt.