December 17, 2009–Las Vegas golfer Natalie Gulbis was once again a member of the LPGA Tour team this year at the Wendy's 3-Tour Challenge that was played at Las Vegas golf course Rio Secco Golf Club. Gulbis was joined by Suzann Petterson and Christie Kerr, and the event is televised this weekend on ABC, highlighting all that is Las Vegas golf to the world.

"The Wendy’s 3 Tour Challenge, one of my favorite events of the golf season, will be televised this weekend," Gulbis wrote in her journal at NatalieGulbis.com. "The Wendy’s 3 Tour Challenge will take place at Rio Secco Golf Club in Las Vegas. There are so many things that I love about this event!  First of all, it’s played at the course where I train with my coach, Butch Harmon.  The Butch Harmon School of Golf is on the property, and one of his instructors, Matt, will be caddying for me." Click now for a complete look behind the scenes of the Wendy's. Also, the home course for the Wendy's, Rio Secco, is a Rees Jones-designed Las Vegas resort golf course. Click now to view the official website of Rio Secco Golf Club. 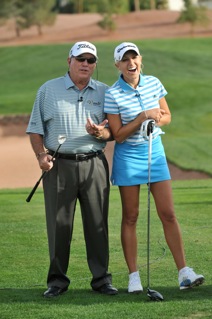 Gulbis has lived in Las Vegas for several years, and has become a part of the community, spending a lot of time at the Butch Harmon School of Golf at Rio Secco Golf Club in addition to in and around her home at the Lake Las Vegas Resort community. Quietly, she also helps area charities in addition to promote Las Vegas golf to the world in the events that she plays in across the globe. Several months ago, Gulbis celebrated her birthday at Blush, an ultra lounge, at Wynn Las Vegas. Also, it's good to note that any golfer can reserve an official golf school with Harmon at his school, thus gaining access to the same secrets that he shares with Gulbis, Phil Mickelson, Stewart Cink and the other major stars that learn at the school. Click now for the official website of the school.

The PGA Tour team for the Wendy's was Cink, Fred Couples (playing as a 50-year old), and Bubba Watson, while the Champions Tour team was the defending champion and was made up of Fred Funk, Nick Price and Jay Haas. Gulbis loves the opportunity to play against the men, and notes that this is a unique event in that allows each tour to compete against each other on a level playing ground. The Rio Secco course that they played is the sister course to Cascata, where some of the Wendy's 3-Tour Challenge festivities took place. Cascata is also a Rees Jones golf course that is a resort layout.

"This is the only event where all three professional tours can equally compete against one another for the million dollar purse, and of course, year long bragging rights!" wrote Gulbis, while also noting that the LPGA Tour won in 2007. "Each Tour plays from different tee boxes.  The LPGA players play a tee box ahead of the Champions Tour, and the Champions Tour, a tee box ahead of the PGA.  Essentially what this does is allow each tour to hit a comparable club into the green. This (is) my fourth appearance in the Wendy’s 3 Tour Challenge." Check your local listings to view the Wendy's 3-Tour Challenge this weekend and celebrate all that is Las Vegas golf. PHOTO: JRICKMARTIN.