December 22, 2009–For those who don't know, some of us refer to San Diego as Las Vegas West because it's an annual tradition for many Las Vegas residents to spend part of the summer in the San Diego area beating the heat. Some folks have second homes in the area and frequent the beaches, golf courses, and other activities in the region. Now, PGA Tour player and Las Vegas golfer Charley Hoffman has joined that group, even if it all started when he moved to "San Diego East".

Hoffman grew up in the San Diego area before making the reverse trip from that area to Las Vegas (San Diego East) to play for perennial powerhouse UNLV, where he helped lead the 1998 team to the NCAA championship along with fellow San Diego native Bill Lunde. That championship was just a few years removed from when another San Diego native, Chris Riley, became the first 4-time All-American in any sport at the school when he played golf for the Rebels. Now all three still spend a lot of time in Las Vegas, but also head back to San Diego to spend time with family and friends. Recently, San Diego Tribune writer Tod Leonard caught up with Hoffman for a feature article.

Hoffman told Leonard that he thought his 2009 PGA Tour season could have been better, but he wasn't completely unsatisfied with the way things worked out. Hoffman didn't win but finished 41st on the money list, earning $1.89 million, a better finish than in 2007 when he won his lone PGA Tour event, the Bob Hope Chrysler Classic. “Obviously, you assess your career based on wins, and I didn’t have a win,” Hoffman told Leonard. “So from that standpoint, it was uneventful and not what I wanted. (But) all in all, if I could have every year where I finish 40th on the money list and not have a win,” he said, “I’m probably going to be all right with that.” Click now for the entire Tribune article.

Hoffman lives a majority of the time in Las Vegas, and is part of a legion of Las Vegas tour players who play and practice at the two PGA Tour-owned Las Vegas golf courses, joining Riley, Lunde, Dean Wilson, Alex Cejka, and many others for friendly games. The TPC Las Vegas course is a resort course that is open to all players while TPC Summerlin is a private layout which is the host course for Las Vegas' Justin Timberlake Shriners Hospitals for Children Open. Click now for the official website of TPC Las Vegas where you can reserve your Las Vegas golf tee times online with the official management of the course. 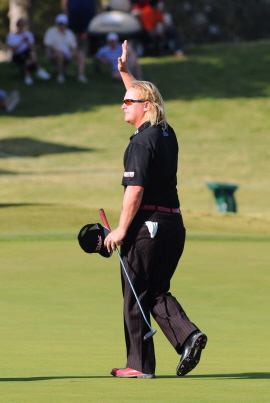 Hoffman was recently spotted in Las Vegas taking a look at the newly-renovated Las Vegas Country Club course. The historic private course was given a new look and 18 new greens recently by Mark Rathert, and all those who have played give it a thumbs up while also admitting that the course plays several shots harder than it was previously. Hoffman and his fellow Rebels spent much time playing and practicing at Las Vegas Country Club, a facility that is one of the most centrally located Las Vegas golf courses and just minutes from the UNLV campus.

Hoffman and his wife, Stacy, have also become proponents for charities in both areas, and Hoffman is once again hosting a major fundraiser for the San Diego Junior Golf Association. Hoffman grew up playing in the Association and has been the host of the event for the last couple years, helping to raise $125,000 last year. The event is January 25, 2010, at Del Mar Country Club. Other PGA Tour players who played last year included Riley, Pat Perez, John Mallinger, and many others. For complete information or to reserve a spot, click now to Hoffman's official website.

Hoffman recently created his own Foundation, and also is selling gear and keeping fans up-to-date at CharleyHoffman.com. Hoffman is sponsored by Waste Management and is dedicated to spreading the green message, even wearing a green glove while on Tour. You can buy cool Think Green golf gear at the website all the while supporing the new Foundation and its various causes.–Brian Hurlburt. PHOTOS: Steve Spatafore.