January 14, 2010–Natalie Gulbis has lived in the Las Vegas golf region for many years, and loves her Lake Las Vegas Resort golf community. And this week, Gulbis, and her fellow LPGA Tour and Unites States Solheim Cup teammates, visited the White House and were entertained by the First Golfer, President Barack Obama. The ladies gave Obama some golf tips, and watched as he tested his putting stroke in the Oval Office.

"We were invited by President Obama to come to the White House and spend some time with him," Gulbis wrote via email. "It was an honor to be recognized by our president and he was gracious to spend time with us. We spent the day touring the monuments and the White House, and met with President Obama at 4 pm. After taking pictures he chatted with us about his golf game and his recent trip to Hawaii where he made his first birdie with a 2 iron. We, of course, were surprised he still used a 2 iron. He asked us if we had any tips to get his girls involved in golf. We suggested he take them to watch us play. We also presented him with a left-handed putter and he immediately took the cover off and started working on his putting stroke in the oval office."

The political media has reported the birdie with the 2-iron as the first birdie that the president has ever made, but public reports reveal that the president is a good golfer and we here at Golf Las Vegas Now assume he has made other birdies, but maybe never one resulting from an approach shot with a 2-iron. We are dilligently trying to confirm this breaking story. Also, it appears as Gulbis was being humble in her email when she stated that "we" suggest to the president to bring the girls to an LPGA Tour event. Media reports reveal that it was Gulbis who offerred the suggestion when Obama asked the group how to best get his children involved with the game. Obama is said to be planning a visit to Las Vegas in February, and there are many Las Vegas golf courses who would welcome the first golfer.

Gulbis was joined by her Solheim Cup-winning teammates including Michelle Wie, Paula Creamer, Christina Kim, Captain Beth Daniel, and LPGA Tour Commissioner Mike Whan, among others. Day two of the official visit included stops at the Pentagon and the September 11 Memorial. "Four years ago we were here in DC to meet President Bush," Gulbis also released on Twitter about the visit. "It's an honor to be back and to meet our new President today. My best memories as a professional golfer have been on this US Solheim Cup team. I have been on three cup teams." 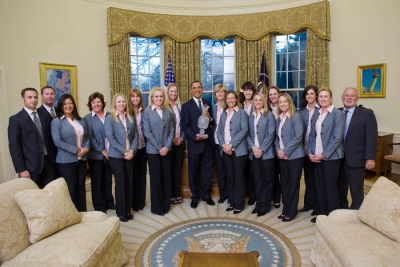 The U.S. team won the Cup by a score of 16-12 at Rich Harvest Farms in Illinois in August in front of a record crowd of 120,000 over the entire event. The U.S. was led by Michelle Wie who was 3-0-1 for the week while Brittany Lang and Morgan Pressel were also undefeated for the event. Gulbis also continued her streak of being undefeated in Solheim Cup singles play, and also was a part of her third-straight Solheim Cup team victory.

"I think being on the team is the best part of this week," said Gulbis following the team's win. "We play an individual sport where we're competing against each other week in and week out, and to be able to come together and play with the best players in the world and be wearing the American colors and playing for the United States and playing in front of these fans … it's all the interaction stuff with the team, from the practice rounds to coming up here in a couple days to the matches that makes it amazing." Gulbis works on her swing with Las Vegas resident Butch Harmon at the Butch Harmon School of Golf at Las Vegas golf course Rio Secco Golf Club.