January 19, 2010–Annually, the pros who comprise the Southern Nevada Chapter, Southwest Section, PGA of America, gather to honor their own for excellence in several categories. This Las Vegas golf awards event was held in the TPC Summerlin clubhouse this week. The TPC Summerlin is a private Las Vegas golf course which is the home of Las Vegas' PGA Tour event, the Justin Timberlake Shriners Hospitals for Children Open. Major award winners for the evening included Joe Kelly, Professional of the Year, and Patrick Duty, Player of the Year. Callaway Golf, ClubCar, and Desert Buick/GMC/Pontiac were also recognized for sponsorship. 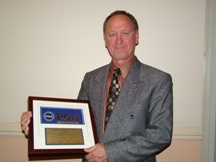 Duty was unable to attend the ceremony, but in addition to winning Player of the Year honors, he also earned the stroke average award. Duty, who recorded an average of 72.64 in 14 events, is a professional at Wynn Golf and Country Club, a Tom Fazio-designed Las Vegas golf course located on the Las Vegas Strip. Among Duty's victories in 2009 were Players Series events at Rio Secco Golf Club and he kicked off 2009 with a win at Angel Park Golf Club by firing a solid 68. He also finished second at the Southern Nevada, Southwest Section Chapter Championship behind Boulder Creek Golf Club pro Troy Helseth. 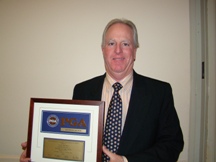 Kelly is a longtime Las Vegas PGA of America professional who oversees the operations of Golf Summerlin, a conglomerate of three Las Vegas golf courses in the master-planned community of Sun City. Kelly earned the Pro of the Year award that is described thusly: "For outstanding respect and honor as a golf professional who through qualifications and endeavors in the promotion of golf, leadership, and service and dedication to fair play has excelled to the highest level of the profession." Kelly has long been dedicated to community service and also serves as President of The First Tee of Southern Nevada in addition to being a board member of the Las Vegas Golf Hall of Fame. "Junior golf has always been number one with me ever since I came to town," said Kelly, who has served the Las Vegas golf community since the 1970s. "And if not for those of you in this room, we wouldn't have junior golf, so I thank you."

The Senior Division Player of the Year honors went to Tom Fischer of Red Rock Country Club. Fischer earned the award for the second year in a row. In 2008, Fischer set a goal to win the award in 2009, and now has surpassed the original goal. Among the 2009 season highlights for Fischer was a Player Series victory at Sunrise Vista following a round of 68, and a second-place finish at the Senior Match Play event. Bob Lendzion, a lifetime PGA of America member, won the Senior Match Play tournament. 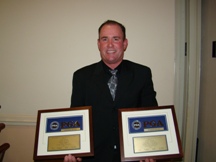 Gary Knapp, a professional at SilverStone Country Club, earned the Senior Stroke Player Average award. Knapp recorded an average of 73.18 in 11 events. Knapp also earned the Teacher of the Year award in a hotly-contested category that for many years was the domain of Mike Davis, a former president of the Chapter. Knapp was formerly a professional at Lake Las Vegas Resort but, with the closing of the two resort golf courses, has moved locations. Knapp joined Duty as a multiple award winner for the 2009 season. Several teaching pros were up for this award. 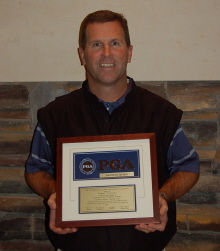 The Junior Golf Leader of the Year went to Anthem Country Club professional Tommy Darland, who helped sustain Las Vegas' event on the American Junior Golf Association schedule. Darland and the private Anthem Country Club hosted the AJGA event in 2009 and expect to do so again in 2010. Darland also oversees a solid junior golf program at Anthem in addition to assisting The First Tee of Southern Nevada as he can. "Thank you for this recognition, and I accept this award on behalf of the membership and staff at Anthem," said Darland.

The prestigious Bill Strausbaugh award went to Angel Park Golf Club Head Professional David Stead. Amy Bush, PGA of America Professional and UNLV Women's Assistant Golf Coach, who handed out the awards, said the following about the award: "The Bill Strausbaugh award honors a professional for distinguished service in mentoring other PGA professionals, integrity and character reflecting positively upon the professional, and outstanding involvement in charitable and community activities." Stead, who serves as the Vice President of the Chapter, was appreciative to be recognized. "Wow, I'm not sure what to say, but this is an amazing honor," said Stead. "The many friends in this room serve as my inspiration and I thank you very much." 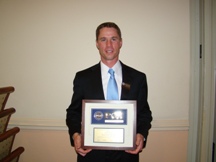 Davis, who is serving as the Past President on Chapter's board, earned the Horton Smith award. "The Smith award recognizes a professional for dedication, leadership, and outstanding contributions to the PGA Education Programs," said Bush prior to announcing Davis as the winner. Davis is one of only a few professionals in the PGA of America who have earned Master Professional status, and he has worked to improve the levels of educational opportunities for Las Vegas professionals. Davis serves as the Director of the Walters Golf Academy that operates at Las Vegas golf courses Desert Pines, Royal Links and Bali Hai. 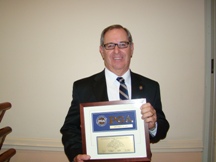 The Person of the Year went to Callaway Golf representative Ryan Judkins who battled health issues in 2009, and underwent open heart surgery. Judkins, and Callaway Golf, have been supporters of the Southern Nevada Chapter, Southwest Section, PGA of America for several years. "This is a quite a shock to someone who had open heart surgery recently," said Judkins, with a smile. "But to all of those in this room who I work with, you make me love my job. My heart goes out to each and every one of you." 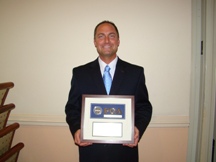 Three Las Vegas golf courses and their representatives were honored for excellence in merchandising. For the private sector, Chris Schindler, representing TPC Summerlin, was honored. For the resort course sector, Todd Hajduk, representing TPC Las Vegas, was honored. And for the public course sector, Tate Stull, representing Rhodes Ranch, was honored. Each winner thanked their individual staff members for helping to earn the awards. Board member Joe Lescenski also honored four members of the Las Vegas golf media for their help in promoting the game of golf. Media award winners were Jenny Scheid, John Asay, Dennis Silvers, and this writer, Brian Hurlburt. 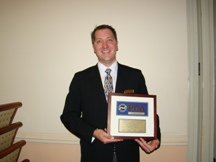 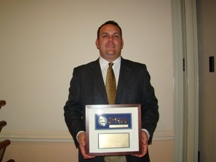