February 21, 2010 (Las Vegas, Nevada) UPDATED 2/22 –Tommy Armour III grew up playing Las Vegas golf courses, before hitting the big time on the PGA Tour. Armour III now calls Texas home, but still has friends in Las Vegas and was inducted into the Las Vegas Golf Hall of Fame in 2008. Now he is 50 and is having good success and a good time on the Champions Tour, where he fired a 61 last week and was among the leaders this week. Armour III fired a final-round 72 and finished in a tie for 9th.

"I know everybody here," Armour told PGATOUR.com about the familiarity he already feels on the 'new' tour. "Out there, (on the PGA TOUR), I go, 'Hi, how are you?' Out here, I know the wives' names, the kids' names. I've seen their kids grow up." Armour was the co-leader with Tim Simpson through the first two rounds of the Allianz Championship in Florida. Last week he finished one shot back of Fred Couples at the ACE Group Championship with the help of a final-round 61. Armour III eagled the seventh and then birdied holes 8, 9, 12, 14, 15, 16 and 17 during the 61. 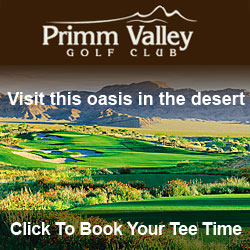 In his PGA TOUR career, Armour was a final-round leader/co-leader five times and went on to win twice, most recently at the 2003 Valero Texas Open. Armour also has been very hot this week, as he was last week. Armour had a run of five birdies in a row on the back nine during the second round which tied the best birdie streak of the year on the Champions Tour. Tom Watson made five-straight birdies in the second round of the Mitsubishi Electric Championship at Hualalai and Dan Forsman made five-straight birdies in the second round of last week's ACE Group Classic. Armour's 8-under 64 in the second round means he averaged a 64 over a three round-stretch on the Champions Tour. During those 54 holes, Armour was a cumulative 24-under-par with 22 birdies, 2 eagles and two bogeys.

Like Fred Couples last week, Armour III was trying to win in his second career start on the Champions Tour. Others who won in their second starts on this Tour include Lee Trevino and Tom Watson. Armour III won the 2003 Texas Valero open in a PGA Tour record scoring effort of 254 over four rounds. Armour III also won twice on the NIKE Tour, and once shot a 60 during the PGA Tour's Las Vegas Invitational, a round played at Las Vegas Country Club. He missed a 2.5 foot putt during that infamous round. Some notes in this article provided by PGATOUR.com.