March 7, 2010 (Palm Beach Gardens, Florida)–On paper, the Champion Course at PGA National looks tame for your average professional: par 70, 7,241 yards. The stimpmeter reads 10.6 feet, which is not exactly Augusta on a Sunday. But once you feel the wind and see the tucked pin locations, the attitude towards this course changes. Jack Nicklaus, who has designed four Las Vegas golf courses, created the infamous Bear Trap set of holes which continue to intrigue and antagonize golfers at the PGA Tour's Honda Classic.–By Tom Collins.

Padraig Harrington said it best: “You don’t like this golf course, you’re not good enough." Originally designed by George and Tom Fazio in 1981, Nicklaus was called in to “refurbish” the course in 1990, unveiling the devious “Bear Trap” and turning holes 15, 16, and 17 into deal-breakers for solid rounds of golf. On the 15th tee, a famous quote from Nicklaus rests below a 7-foot bear statue: “It should be won or lost right here.”

Nicklaus, who still reigns as the best player the game as known, is also one of the best and most prolific golf course designers. He has left his mark in Las Vegas as both. Nicklaus has won several PGA Tour tournaments played in Las Vegas, and was the architect for Las Vegas golf courses Reflection Bay Golf Club and SouthShore Golf Club at Lake Las Vegas Resort, Bear's Best Las Vegas, and the new Chase at Coyote Springs. Among the Las Vegas golf tournaments won by Nicklaus was the Sahara Invitational which was played in the 1960s and 1970s at what is now called Las Vegas National Golf Club. Click now to view the official website of Las Vegas National Golf Club for your Las Vegas golf tee times. 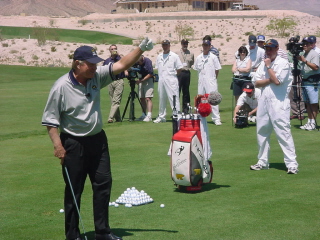 Again, on paper, the 15th, 16th, and 17th holes at PGA National—a par 3, 4, and 3, respectively—are all manageable yardages. Each hole, however, tries to exploit a weakness: every player must be precise with judging the wind, or they’re in the water. There simply aren’t any bailout areas. Last year, the 17th hole was the hardest par-3 on tour, with a stroke average of 3.395. And the 15th? The 4th hardest. For many players, like Nathan Green, a conservative approach is the only solution. “Whenever I play those holes, I just go middle of the green.”

One thing is certain: play well on this golf course, and a successful future is all but guaranteed. Two of the last six winners of the Honda Classic—Todd Hamilton and Y.E. Yang—went on to win major championships later in the season in which they won at The Honda. But did the Bear Trap live up to Jack’s expectations? “No, not at all," says the Golden Bear. "I thought it would be nice little speedy holes and it turned out to be a Bear Trap. With the wind, (they are) tough golf holes.” There are several golfers with strong ties to Las Vegas golf courses playing in the Honda including Alex Prugh, Alex Cejka and Scott Piercy, among others. Article provided by GolfLasVegasNow.com contributor and onsite reporter Tom Collins, senior writer for Universal Golf, which can be found at .universalsportmags.com. Collins is scheduled to cover nearly every PGA Tour event in 2010, and will check in from time-to-time for this website.