Las Vegas, Nevada (April 3, 2010)–Las Vegas Golf Region resident Natalie Gulbis is Las Vegas' highest profile Tour golf resident. And if you had a doubt about her reach, the recent news about adidas creating the Signature NATALIE line of footwear ends it. Gulbis, who has lived at Lake Las Vegas Resort for many years, loves the new shoe and was involved in the process of creating it.–By Brian Hurlburt.

"The signature NATALIE blends the performance I need with my love for fashion," Gulbis says about the shoe. "Performance is important to me, but I wanted something stylish and original. I love the way it matches my adidas apparel and I can coordinate my outfits now head-to-toe. I am extremely excited to see other women wearing my shoe, I've had so much fun designing and creating it." Gulbis plays and practices at South Shore Golf Club at Lake Las Vegas, but also spends a lot of time at the Butch Harmon School of Golf with Harmon and the other pros.

The Harmon School is located at Las Vegas' Rio Secco Golf Club, a Rees Jones resort layout. Click now to view the official website of Rio Secco Golf Club and learn how you can reserve your Las Vegas golf tee times online. Also, the Butch Harmon School of Golf is open to all golfers and you can click to that official website to improve your game with the world's best instructor. The Las Vegas Golf Region is home to more than 50 golf courses plus more than 30 pros have very strong ties to those Las Vegas golf courses including Ryan Moore, Rickie Fowler, Chris Riley, Nick Watney and many others. 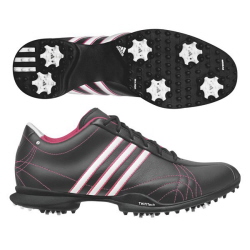 A Signature PAULA line of footwear was also announced for phenom Paula Creamer, a fellow United States Solheim Cup teammate of Gulbis. An adidas press release describes the new Signature NATALIE shoe as such: "Incorporating sleek styling and intricate detailing, the signature NATALIE is a unique blend of tour-level performance and fashion-forward design. Reflective of Natalie's personality, this shoe features contrast deco stitching throughout with rhinestone inlays displayed in the heel and tongue. Another key feature is the 'removable' lace tag embraced with Natalie's Signature swan logo and an original artwork print on the footbed. On the performance side, advanced THiNTech low-profile technology brings the foot lower to the ground enhancing the sleek look while improving stability and better overall footwork." Gulbis has been with TaylorMade-adidas Golf Company for several years and the new line extends that relationship.

"After looking closely at the women's footwear category, and examining our brand assets, we became convinced that both Paula Creamer and Natalie Gulbis had the athleticism, charisma and personal style to help us launch a new generation of women's footwear into the marketplace in 2010, "said Dave Ortley, Senior Director of Global Footwear. "We worked closely with Paula and Natalie throughout the entire process and found inspiration from each of their lives both on and off the course as they contributed to the project at every stage of creation." Gulbis is known for being very involved in her off-the-course projects including charity work and other endorsements. Gulbis is always quoted as stating how much she loves the Lake Las Vegas Resort community and living in the Las Vegas Golf Region.