Las Vegas, Nevada (May 11, 2010 UPDATE May 12)–When LPGA Tour golfer Stephanie Louden remembers Erica Blasberg, who was found dead at the age of 25 in her home in Henderson, Nevada, a suburb of Las Vegas, she will think first to that day in 1999 when she went heads up against her in the 3rd round of the United States Women's Amateur. She defeated Blasberg, who was only 15 at the time, 1-up, but not before the future Arizona All-American, U.S. Curtis Cup player, and LPGA Tour golfer had made a lasting impression.–By Brian Hurlburt.

"I remember that she was a great player and she was very young," said Louden. "She was a gutsy player and it was a very difficult match, but I ended up beating her on the final hole." Louden said that she recently spoke with Blasberg while in Mexico for the LPGA Tour's Tres Marias Championship, where they ate dinner in the same restaurant. Louden grew up in Las Vegas, but recently moved to Texas, and said that the news is tragic and makes her appreciate the delicate nature of life. "You have to appreciate everything because you never know," said Louden, while expressing her thoughts and prayers to Blasberg and her family.

A service will be held at a golf course near her native Corona, California, on Wednesday, May 19. According to her agent, Chase Callahan, Blasberg's current sponsors will fulfill their contractual obligations with the money going to the U.S. Girls Junior Golf Association. The family requests flowers be sent for the service. We will post those details when they become available. Blasberg was a very accomplished player, and in 2004 was a member of the U.S. Curtis Cup team along with Michelle Wie, Paula Creamer, and Brittany Lang, among others, That team won the matches. 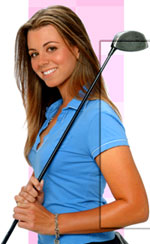 The news spread through the Las Vegas golf community rapidly, with many seeking answers to what happened, but all expressing concern and sorrow for Blasberg. Blasberg was found around 3:15 PM on Sunday, May 9, at her home in Anthem. Police responded to a 911 call to her residence. No official statement about the cause of death has been announced, but her father, Mel, has been quoted as saying that an original ruling was apparent suicide but there are very mysterious circumstances. Henderson Police Spokesperson Keith Paul would only say a death investigation is ongoing, confirming what he said on Monday. Others with knowledge also state that final toxicology and autopsy findings probably won't be available for 2-4 weeks but a thorough investigation and interviews with "witnesses and suspects" is ongoing.

Southern Highlands Director of Golf Jay Beckman said that Blasberg had been practicing very hard for the last few weeks and she was looking ahead to attempting to qualify for more LPGA Tour events this season. "Erica was a very important part of the Southern Highlands family," said Beckman, a close friend. "Not only was she a great person but she was a great golfer, and she will be deeply missed." Blasberg played and practiced at Southern Highlands Golf Club on a daily basis when in Las Vegas, where she has lived for several years. All day Monday pros and community members reached out searching for answers, but no matter the findings, a tragedy had struck the golf world.

The First Tee of Southern Nevada sent an email to supporters with a photo of Blasberg from the 2007 Danny Gans Partee Fore Kids, played at Southern Highlands Golf Club to benefit the organization. She was a part of the winning pro-am team. "The First Tee of Southern Nevada and the golf community as a whole has lost an amazing and talented gem. Erica Blasberg was a great friend and supporter of TFTSN. She never hesitated to participate in our events and volunteer her time to help us introduce kids to the best in life through the game of golf. She was 25 years young. Gone too soon. Gone too young. She will be missed.  Our thoughts and prayers are with her family."