Pebble Beach, California (June 16, 2010)–The best player in the world is a bit worried at the moment. Phil Mickelson, who is coming off his win at The Masters, thinks the greens at Pebble Beach for the U.S. Open this week could turn out to be very severe. And Mike Davis, who set up the course for the USGA, admits, with some pride, that the greens are the smallest ever for a major championship. Plus long and thick native grasses around the bunkers could prove brutal. That was the big news at Pebble, but read on for other news and notes from Wednesday at the US Open.–By Brian Hurlburt. Photos courtesy USGA. 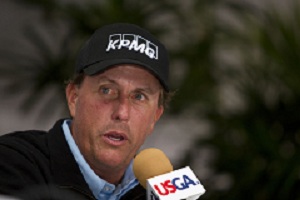 "I think it's the best U.S. Open setup that I've seen," says Mickelson, who works with Las Vegas resident Butch Harmon, who is at Pebble. "I think the one area of concern I have is the greens, they're so small and they're so firm that, given that there's not any forecast for rain, I'm certainly concerned that we could have 14 potential 7th holes at Shinnecock, if we're not careful." Other of the world's top players share the concern, but Mickelson was one of the more vocal about how challenging the putting surfaces could become. Davis realized coming into the 2010 event that the greens could become the story.

"What really makes this an extremely tough but great test of golf is, first of all, the putting greens," Davis said of the greens. "They are — I thought through this in my mind. They are absolutely the smallest greens in major championship golf. There's no course I can think of on the British Open rota that are close to this size; obviously Augusta National greens are bigger; and I can't think of a venue that the PGA of America has used (that would be smaller). So at least for the majors, this is by far — I say by far, they really are the smallest greens we go to." In person, the greens look very small, and making them even more intimidating are the native grasses that have been allowed to grow to several feet thick on the edges of the bunkers. A bad bounce could be disaster if a ball drops into the rough without scooting through into the bunker.

This writer thinks the championship could be decided on a bounce, one way or the other. And that thought was echoed by television commentator Mark Rolfing, who says he witnessed Wayne Gretzky barely miss the green on the first hole of the Golf Digest US Open Challenge last week, but then be forced to take an unplayable lie when his ball trickled into the grass guarding the greenside bunker. "Those players were only amateurs, but it made a huge difference in their rounds, and I think it will this week," says Rolfing, who also says that the look is completely new for the Open in 2010, and the first time he has seen it implemented for an Open at Pebble. Rolfing also had very nice things to say about Las Vegas resident Charley Hoffman, who he knew was from Las Vegas. Hoffman, however, isn't in the field. 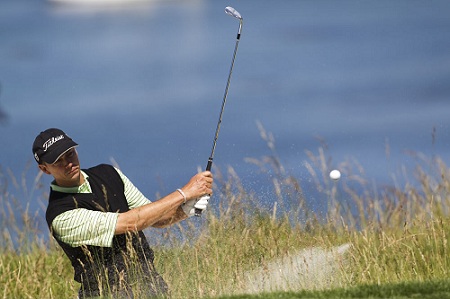 There are several other golfers with strong ties to Las Vegas golf courses who are in the field this week. Among them is Craig Barlow, who currently has limited exempt status on the PGA Tour but who qualified for the Open. Barlow is playing both the Nationwide Tour and PGA Tour this year, and has had decent success on the big tour. He has made four of four cuts on the PGA Tour this season, but has only earned a little more than $48,000. Barlow, who plays out of Las Vegas golf courses Rio Secco Golf Club and Cascata, last played in the Open in 2008 when he missed the cut. Barlow played a practice round with Shaun Micheel on Wednesday.

Las Vegas resident Butch Harmon, as usual, is holding court on a US Open driving range. Not only does Harmon officially work with several of the tour pros playing this week, he is also randmonly asked for advice by other pros, including Justin Leonard on Wednesday. Leonard, who was hitting balls several stalls over from fairly-new Harmon pro Dustin Johnson, walked by Harmon on his way off the range and asked about the hand position during takeaway. Harmon spent a lot of time with Johnson, much of it discussing alignment and ball position. Among the other Harmon pros in the field are Ernie Els, Stewart Cink, Nick Watney, and Mickelson. All spend time working with Harmon at his school which is located at Rio Secco. Watney is a Las Vegas resident.